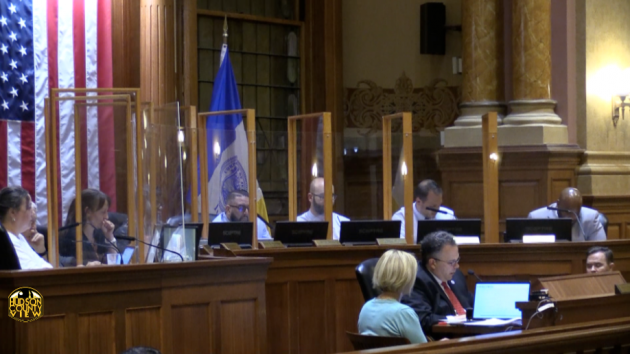 Nick Zurawski, who also spoke at the August council meeting, again called on DeGise to step down, being highly critical of her public remarks from last month’s session.

“She can say anything she likes. She can admit fault. She can apologize. She is choosing to place her own private interests over the interests of her constituents, and she must resign. Maybe hit-and-runs are a routine event for her that she can’t believe we feel so strongly,” he said.

“Maybe her lawyers haven’t decided how to get her out of an obvious felony. Maybe her lawyers want her to better prepare her for court. The contempt she felt for us was evident. We didn’t have to be in the passenger seat to see the video of what happened. She just kept going.”

Another speaker from last month, Adrian Ghainda, said that DeGise needs to face consequences for her actions.

“She made a terrible decision, and there are consequences. We’ve seen the many photo ops taken as damage control,” he noted.

Conversely, Robert Knapp was one of three people who spoke in DeGise’s favor (as he did at the last meeting).

Without singling anyone out, Knapp also said the media coverage of DeGise was not fair, stating that murders, rapists, and child abusers did not get the same kind of treatment.

Others, like Adam Cohen and Sumit Galhotra, asked how constituents can count on DeGise to put their best interests forward given the details about the hit-and-run, along with trying to get out of a tow in Hoboken last year, and unpaid parking tickets that led to license suspensions.

Laura Lithgow said that it is long overdue for her council colleagues to ask her to step down, as Councilmen James Solomon and Frank Gilmore have, and if she still won’t, a recall is necessary.

“You have officials like Amy DeGise and company who disregard the wishes of the people. They do not care. Their only concern is their personal gain. It’s time to vote her out. Amy DeGise must be recalled.”

In what was by far the most emotional speech of the evening, Safe Streets JC member Colin DeVries told a shocking story about how his grandmother had a fatal heart attack while driving when he was a three-year-old passenger.

“When I was three, I was involved in a deadly crash. My grandmother and I were driving on the interstate near Newburgh, New York when she experienced a heart attack. The car careened off the highway, hit a berm, and flipped on its roof onto a watery ditch,” he began.

“My grandmother was pinned and I was dangling upside down from a child seat struggling to keep my head above water. Other drivers saw the crash and they stopped. They pulled over on the interstate to help.”

Improbably, one of those drivers was famed boxing heavyweight champion Floyd Patterson, who was accompanied by two others to render aid, reaching into the car to hold him over the water until the jaws of life arrived.

“The hit is one thing. The running is a different thing entirely. The law of leaving the scene exists because lives are at stake. I will never understand why you didn’t stop that day. I will never forget it. You are a councilperson. You actions after the crash and your complete lack of humility to this day have been disgraceful and disrespectful to your constituents.”

Megan Carolan noted she launched the Change.org petition against DeGise, noting that her husband was still recovering after being hit by a car years ago.

“I am frankly disgusted we are here again in September. This council cannot stand up for decency for its residents. My husband himself has survived being hit by a car here in Jersey City,” she said.

“There’s no reason for the legal process to see how this plays out when we all saw it. My motivation is human decency and expecting more of our public officials … We have become an international laughingstock You should all be ashamed of not speaking up.”

She noted the petition has received 7,000 signatures, including from all 50 states and Washington, D.C. (as well as other countries), and 1,300 from Jersey City residents.

Local conservative political commentator Fernando Uribe, who had DeGise as a frequent guest on his podcasts prior to the hit-and-run, said he wasn’t going to weigh in until the court process was over and criticized several outlets for their coverage (though not HCV).

“Let the process play itself out in court. I don’t think it’s appropriate to pile on … They think they own the road, and they don’t. Make this nuisance more accountable,” he said to boos as he left the podium.

“There’s no excuse for you to keep on going. You must have known you did something wrong. I don’t understand how you are holding public office now,” Kennan DeGruccio said, who asked DeGise to pay attention as she spoke to her and added that her 16-year-old son knows better so she should too.

She also identified herself as a friend of Andrew Black, the bicyclist that DeGise hit after he ran a red light at the intersection of Martin Luther King Drive and Forrest Street.

Council President Joyce Watterman got caught in an argument with DeGruccio and her husband when their son sought speak in place of their brother, which is not allowed.

“A pox on your house!,” Michael DeGruccio exclaimed before leaving.

“I will not be disrespected. We follow the rules,” Watterman said.

Eventually, Alex Gillette read the letter they intended to read, which was from Alain Mentha – the founder of Welcome Home Jersey City – who is a terminal cancer patient.

“Amy DeGise needs to leave now. We’ve all seen the video footage of the collision, since learned about her grotesque sense of entitlement. We don’t need to wait for any court rulings. She doesn’t either. Amy DeGise, you are bringing dishonor to our city. The time to act is no,” he wrote.

Furthermore, progressive organizer Hector Oseguera said that DeGise should address her driving record, the Hoboken tow incident, and why she lives in low-income housing since they aren’t related to her court matter, while Koren Frankfort said the judicial and electoral process are separate and therefore one has nothing to do with the other.

Unlike at the previous meeting, DeGise didn’t address her opposition after the public portion concluded around 11 p.m.

Out of 94 speaker signed up for the public portion, 41 were not present when called, 29 called for DeGise to resign, and three spoke in her favor.