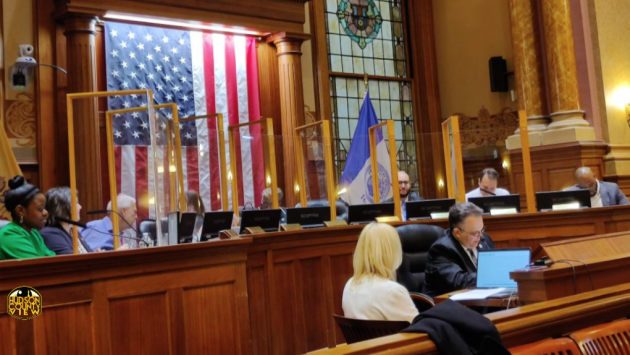 Shannon Dwyer, an intern for Ward D Councilman Yousef Saleh, explained how this would be helpful.

“According to the National Committee on Pay Equity and the Pew Research Center, women on average earn less than men and must work longer for the same amount of pay. According to one report, up to 42 days more for women,” she said.

“This disparity increased during the pandemic. It is appropriate that this ordinance is being voted on during Women’s History Month.

She noted former Congresswoman Mary T. Norton, known as “Battling Mary,” who represented Hudson County from 1952 through 1951, fought for women’s rights and to improve working conditions.

“You too are creating history and a chapter to this story of equality and equity for women in the workplace,” Dwyer added.

From there, Ward A Councilwoman Denise Ridley thanked Saleh for introducing the ordinance and supporting the cause.

“You better be with all the sisters that you have,” she joked. “This is very important to assisting some of the inequalities women face, and so I’m happy this is moving forward, and we’re supporting it.”

“Thank you for hiring great interns. It’s important to be reminded that no matter how much work has been done, there is more work to do until there is equity among everyone who is working here in Jersey City,” added Ward B Councilwoman Mira Prinz-Arey.

Saleh noted that most of the work on the ordinance was done by Dwyer and women in the city’s law department.

“Literally I was just the vessel. I really appreciate all of us working together to get this done,” he explained.

“It will greatly help the women and men in Jersey City and hopefully eliminate the pay gap,” added Councilwoman-at-Large Amy DeGise.

Council President Joyce Watterman also gave her thoughts on why the local legislation is significant.

“Women are responsible for two-thirds of the work done worldwide yet only earn only 10 percent and women of color even less, and they only own one percent of property We have to keep fighting until we say yes to equality,” she noted.

“It’s wonderful that this evening we mark pay equity so we can achieve transparency,” Jeanne Daly said during the public portion.