Many Polish activists spoke before the Jersey City Council last night to let them know that they still oppose a deal brokered by Mayor Steven Fulop and the Polish consul general in New York to move the Katyn memorial from Exchange Place to York Street.

At one point the council chambers was standing-room only by the time Slawek Platta, a Queens-based lawyer and candidate for State Senate in New York, admonished the council for introducing and passing a first-reading ordinance that aims to permanently move the Katyn Monument from Exchange Place.

“Councilmen, do you know what you voted on today? Where is the due diligence and due process for the Polish community? We in the Polish community did not get a fair shake this time. Why are you voting on something that you do not possibility understand,” said Platta.

“You’re looking to place this monument in a new place atop a sewer, a monument that contains the remains of Polish soldiers!”

He then directed more ire towards the council by vowing that he and the Polish community would keep on protesting to stop the relocation.

Less than two weeks ago, Fulop announced an agreement for a new home for the memorial, which left him subjected to many boos and other heckling.

At that event, Platta tried to approach the podium, but was quickly told by Fulop to back up or else his security team would escort him from the chambers.

Following Platta, Krzysztof Nowak, the president of the Katyn Massacre Memorial Committee, who worked with the city and the Consul General to secure a new home for the monument, challenged Platta’s bold claims.

He tried to explain that the new site, York Street, is superior to Exchange Place since it provides a “more prominent, appropriate, perpetual and permanent [home] as its location,” by which he was roundly booed.

As a result, Council President Rolando Lavarro threatened the opposition that they may be removed by police officers if they continued with their rancor.

In addition, Nowak emphasized how the city will be footing the bill for the relocation and construction of a new park at York Street.

“It is the understanding of the committee that all expenses of the relocation and the preparation of the new site for the memorial is to be paid by the city, and that all of the construction work shall be performed by the city at the city’s expense,” he explained.

“It also provides that the city will make all necessary arrangements and agreements with the committee as to the relocation of the memorial and its permanent site at the foot of York Street.”

He clearly touched a nerve among the audience when he challenged Platta.

“Number two, there are no ashes of any human remains in the monument. It’s just pieces of the ground that were brought from Katyn and placed in a box by one of our members visiting there in 1990!”

“Nowak, hold on one second! I want to ask you a question. You met with me and [Councilman] Solomon in the caucus room with the Consul General and the two of you were so against this that it was unbelievable. Then something happened: a political deal. So cut it out,” roared Boggiano, drawing loud cheers and applause from the chambers.

Now that the Council voted to approve a first reading of the ordinance, it will be up for second reading the next time the Council meets on Wednesday, June 13.

Another important ordinance that will make it to a second reading is the repealing of the current obscenity laws, which currently forbids women from walking around topless in public, as well as anyone owning more than five “sexual devices.”

Fulop tweeted shortly after the first readings were all approved.

“Good news tonight is that all agenda items moved forward on the City Council for first reading. From the antiquated obscenity laws, to giving proper respect to the Katyn Massacre Memorial, to the protection of freelance workers. All approved. Day by day moving forward #Jersey City,” he wrote.

We live streamed the debate about the future of the Katyn Monument on our Facebook Page, which can be viewed below. 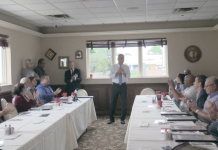