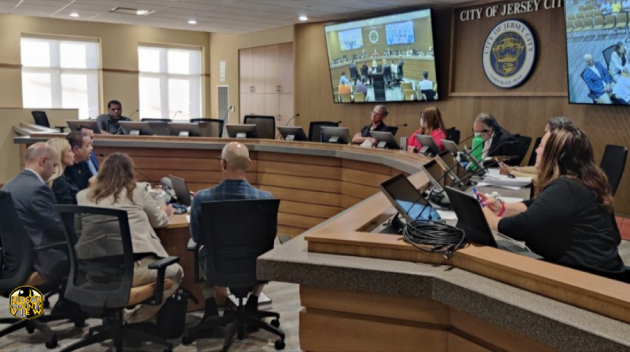 The application for the adult-use cannabis dispensary known as The Medicine Woman, located at 660 Tonnelle Ave., saw Ice-T, whose real name is is Tracy Lauren Marrow, address the board.

“During the governor’s run for election, myself and my friends, we helped campaign for him. I was born in Newark, NJ, raised in Summit, NJ. So, it’s kinda cool to bring something back to Jersey,” he said.

“Helping the community is Ice-T: I’m Black, I’m a veteran, my whole career has been about helping people. Nobody starts a business thinking about social impact. But it’s lucrative enough … that you should want to help the community.

CCB Chair Brittani Bunney commended his patience, since their application was scheduled to be heard at their July 11th hearing but got pushed until last night when that session went past midnight.

Co-owner Charis Burrett, of Capistrano, CA ,said she went to high school in New Jersey and started a cannabis business in 2015. The Medicine Woman already has one location in Bellflower, CA, in Los Angeles County.

“Who will be running the day-to-day?,” CCB member Stacey Flanagan, also the city’s health and human services director, asked.

Burrett said they would bring managers from California to train their staff.

“They said good luck and go forth. His [Fulop’s] wish was to partner with business minority-owned, and were female-owned, and had experience.”

He continued that they have partnered with charities like Redemption House, which helps abused women. Batchelor also said they are working with the Continuous Flower Center, a church headed by City Council President Joyce Watterman and her husband, Dwayne.

They also plan to help the Jersey City Mural Arts program and work with the NFL Foundation on cancer prevention.

“I’d love to open up in Q1 next year. But we’ve been through construction in California,” Batchelor added.

“I appreciate that you own the building,” Flanagan responded, also recognizing Ice-T’s help during hurricane cleanups.

“We want everyone to have access to safe cannabis. You are the first application who have said something about price point. I commend you on that,” Bunney added.

They were approved unanimously (4-0), with CCB Member Courtney Sloane absent.

Next was the Medusa Dispensary and Lounge at 759 A Bergen Avenue, which had previously been carried twice.

Medusa attorney Rosemarie Moyeno Matos said they have been in talks with St. Peter’s University, St. Aaden’s Church, and Hudson Catholic High School, which opposed them placing a consumption lounge so close to their property.

She said it would cost $60,000 a year for an extra security guard to combat the perceived threat.

“They wanted us to pay for that,” Matos explained.

She said they also requested that Medusa do away with their lounge and limit their hours. Medusa offered to reduce the hours for the first year or two of operations. However, the opposition still wanted the hours decreased further.

“We said we would consider reimbursing them for the cost if they could establish that they needed the security presence. We did offer to have another security guard in front. Our proposal was rejected,” Matos said.

“You’re only asking for the retail, right?” Bunney asked.

Medusa Owner Haytham Elgawly said he was willing to bifurcate his application pending the soon-to-be-released regulations by the NJ Cannabis Regulatory Commission on Monday, August 1st.

In other words, once the state regulations are released, the CCB will hear the lounge portion of the application.

“If we’re just going for retail, I think we should just move on. There are still concerns about consumption. I’m concerned,” CCB Commissioner Glenda Salley Perkins said.

“I know they have been reluctant, but I hope you try to continue to work with them. With that, I vote yes,” Bunney stated.

It was approved 3-0(1), with Flanagan recusing herself and Sloane absent, with the crowd on hand cheering their approval.

Oceanfront Holdings, proposing a space at at 141 Newark Ave., was next. They were previously carried due to concerns over their commitment to social equity and justice.

“Revenue generated from the cannabis industry should be reinvested back into the community,” Co-owner Amanda Handy said.

Along with expungement services, she said they are working with the Miracle Temple Church with Pastor Doris Cherry to help them build a music studio, run a summer camp, and a back-to-school program. Their employees will volunteer there too.

They are also partnering with Hope House to help the homeless in part by providing them with supplies.

They were approved unanimously (4-0) after a relatively brief discussion this time around.

Next, the Other Side Dispensary sought a dispensary and a lounge. Seeking to operate at 36 Congress St. in the Heights., they were also represented by Rosemarie Moyeno Matos.

Like her other client, they agreed to have their dispensary retail and consumption lounge license application bifurcated, pending state guidance.

The Other Side is a majority-owned woman, minority, and disabled veteran-owned enterprise.

The majority owner is a local Afro Latina, Eliza Brevard Rodriguez, who also identified herself as a lesbian.

She has an existing business in Jersey City and Hoboken called Sweat Saunas. A graduate of NJCU, Brevard Rodriguez is also a policy director for a state agency and a naval veteran who has seen two tours of combat.

She took the initiative to help veterans with “Boots on the Ground” project. The applicant also vowed to help special needs youth in the Heights by partnering with Ward D Councilman Yousef Saleh.

Her co-owner is Corey Jackson of Scotch Plains, Black man who has been in the industry for 10 years, working for a Multi-State Operator (MSO) in another state.

“I was wondering how you two met,” Flanagan asked,

“I went to school with her wife,” Jackson said.

Brevard Rodriguez also said that their planning board application is pending.

“This is everything the state wanted in regard to justice and equity. These are type of folks we want to see grow,” UFCW labor union leader Hugh Giordano said.

“I’m the manager of Sweat Saunas in Hoboken. I’ve been with bigger stores where I’ve been discriminated against. It’s a good thing to have a businesswoman-owned business,” Erica Medina noted.

Flanagan, Perkins, and Kaplowitz all spoke highly of the applicant before they were approved unanimously (4-0).