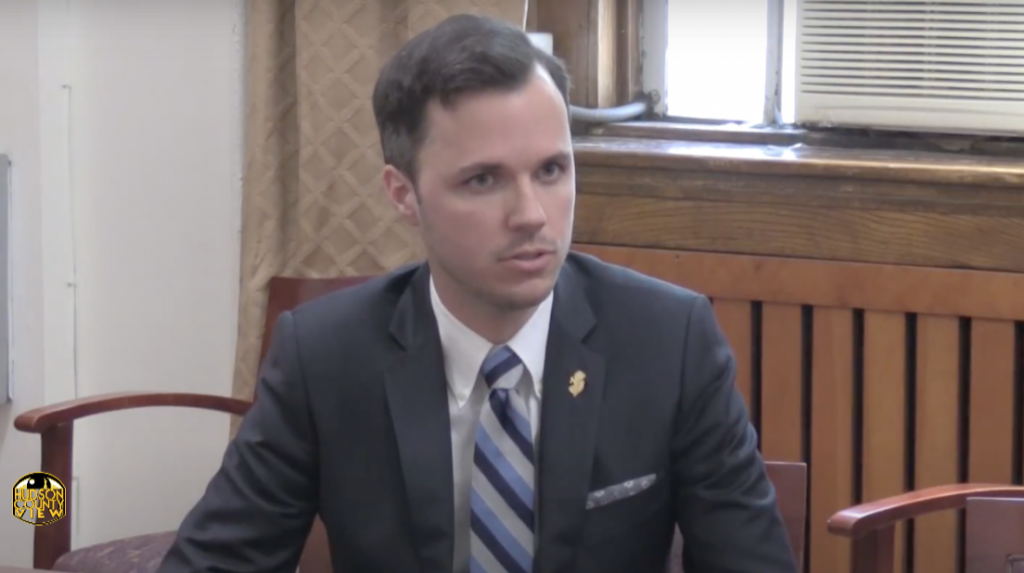 “Jake’s track record speaks to the fact that he’s a strong voice and an independent voice … a person with strong convictions and a strong set of a values,” Fulop said in an interview with Hudnut yesterday.

“That said, it is hard to argue that Jake isn’t the most effective public servant, in terms of accomplishments, amongst those living downtown.”

A little under four years ago, Hudnut announced he was running for the Ward E council seat, which was up for grabs with Candice Osborne not seeking re-election, on mayoral challenger Bill Matsikoudis’ ticket – coming out as a fierce Fulop critic.

Despite a rocky start, the former public defender commended the mayor for giving him an opportunity to serve the city after he came up short in November 2017.

“It’s a testament to the mayor’s character that he invited me three-and-a-half years ago to work in city government. When you’re on a governing body, you need flexibility and you need to work with people’s views you may not share … and I’m confident in what I’ve been able to do in delivering solid results to the residents of Ward E,” Hudnut told HCV.

He cited prosecuting negligent landlords and making sure that restaurants adhere to COVID-19 protocols as example of what the Quality of Life Task Force, which Hudnut runs and moved under the Department of Public Safety in September.

The move faced skepticism from some residents, many of which who had supported the unsuccessful local defund the police movement in the summer.

Hudnut weighed in as to what significance this will have in relation to the upcoming Ward E contest.

“I think we need to have a conversation on policing and show what new 21st century policing looks like. The Quality of Life Task Force is a problem solving-unit … When someone calls for defunding the police, I don’t know that that’s necessarily reflective of what downtown wants. They want people to solve their problems in an effective manner.”

Additionally, Fulop, reemphasized several times that Hudnut’s track record of seeing things through speaks for itself.

“It’s one thing to talk about legalization of marijuana, there’s another to actually take steps and deal with that,” the mayor said regarding Hudnut’s attempt to decriminalize marijuana in July 2018 with less than a week on the job.

Although that didn’t initially go over well with the New Jersey Attorney General’s Office, Hudnut says he still stands by his decision.

“I did that because I had been a public defender and I saw the effect marijuana had on communities of color. Overall, we either dismissed or downgraded to local responses. I put that forward as Jersey City going to the table with the AG’s Office.”

Hudnut also said that outside of a few felony cases downgraded to his office from the county, cases involving solely marijuana in Jersey City have either been dismissed or downgraded to local ordinances.

The Ward E incumbent hasn’t been shy about standing and trading with Fulop when he believes it’s called for, such as issues related to Ward C Councilman Rich Boggiano joining his ticket, the city’s COVID-19 response, and tax hikes implemented by the municipal utilities authority.

Despite knuckling up with Solomon a few times in recent memory, he said his decision to run Hudnut against him isn’t personal.

“I just wanted to put a ticket together that would be most effective to move the city forward. When you look at downtown, I know from being in that seat and not being aligned with Jerry Healy, I had a lot of legislative accomplishments that dealt with quality of life,” Fulop explained.

“When you think about what Jake has accomplished in a couple years, what Jake has done, it’s remarkable and it’s astonishing. You need someone whose effective and not just talking about the issues philosophically.”

Fulop, who announced he’d be seeking a third term almost exactly a year ago, now has his full council slate, which includes seven incumbents, Council-at-Large candidate Amy DeGise – the chair of the Hudson County Democratic Organization, and now Hudnut.

Solomon, who secured Hudnut’s endorsement heading into the December 2017 runoff election against Rebecca Symes, didn’t seem to have any qualms about facing off with his former opponent again.

“I welcome Mr. Hudnut to the race. I am confident the voters of downtown Jersey City will choose the candidate of political independence and progressive values to represent them on November 2nd.”

Murphy, Menendez, Booker get behind DeGise for 2019 re-election kickoff

LETTER: Education Matters ‘will be the voices to move Jersey City...