The Hoboken City Council passed an ordinance many times referred to as “common sense” legal cannabis reforms on second reading. 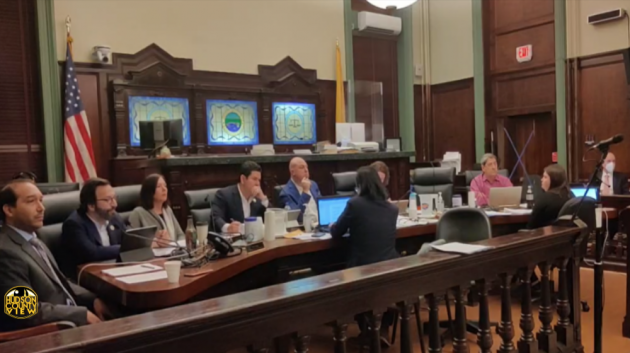 “We all agreed to have unlimited dispensaries. I didn’t see where commonsense was. It’s a head scratcher to me why this is appropriate in such a target for partiers,” resident Sue Keenan said during the first public portion of the meeting.

While the ordinance being considered by the council would allow six cannabis establishments, one per ward, in the Mile Square City, she preferred one adult-use establishment and one medical dispensary overall.

Kennan said she did not understand why no one considered the quality of life impact, indicating legal cannabis would only exacerbate bar crawl events like SantaCon and LepreCon.

“There’s such pushback on that. I don’t get where your minds are,” she added, receiving applause from the room that had many residents who live near or above the Hudson Tavern.

Several residents who live above the shuttered bar have come out against the proposed dispensary on the ground floor, though the city council was not considering that specific project last night.

“I haven’t really haven’t heard from anybody who is supportive of putting cannabis in that location. Six is way too many,” said Tom Brennan, the former Hudson Tavern owner.

He alleged that there was too much foot traffic in that area and therefore many children would have to pass by it.

“There is a difference between supporting legalization in New Jersey and turning Hoboken into a destination for an entertainment zone at the expense of our quality of life. The city has moved far ahead of the people they purport to represent,” added Michael Schrieber.

Cathy Krusack said she didn’t want any dispensaries in Hoboken, stating she was “very nervous” about the influx of people it would bring.

“They don’t go far enough. One, maybe two. I don’t understand the economics of it. Someone should explain to the public what we the city get out of it,” she told the council.

Mary Ondrejka exclaimed “you were all stupid” for approving zoning for legal cannabis last year, noting that the measure they were voting on wasn’t going to change much.

“Blue Violets applied for their licensing before this ruling, so they’re grandfathered in. This is all window dressing. You’re going to get all that traffic.”

6th Ward Councilwoman Jen Giattino questioned if the process had been a bit rushed.

“The NJCRC … requires proof of local support in the form of a resolution. We haven’t done that for any of them right now,” she said.

“There’s a lot of misinformation. I understand where the community is coming from because they weren’t necessarily involved in those other meetings. And during those other meetings, there were no voices of dissent. Zero,” Council President Mike Russo said.

Giattino still asked for more input from the law department, noting the need for a municipal resolution passed by the council for state approval of a cannabis dispensary.

To that end, Corporation Counsel Brian Aloia said he would look into the details.

“Those applications that are already in for consideration. This is not going to affect them in any way whatsoever. I want it done right in Hoboken,” said Councilman-at-Large Joe Quintero.

He also agreed that the ordinance, which also would not permit cannabis dispensaries in C-3 zones, require a minimum of 500 feet between cannabis businesses, at least 600 feet between schools, and no grandfathering clause, wouldn’t make a huge difference in the scheme of things.

Councilman-at-Large Jim Doyle, the council’s designee on the planning board, noted that the governing body approved the “common sense” reforms on Tuesday evening.

“The Cannabis Review Board has voted though in the Hudson Tavern?,” Giattino later asked.

Russo, who sits on the review board, said that they did, noting that they don’t explicitly vote on the host agreements.

“Can the mayor make changes to the host agreement? This seems to be the one everyone is up in arms about,” Giattino stated, to which Aloia said he would look into it.

4h Ward Councilman Ruben Ramos noted the current C-3 exemption allows businesses to open in residential areas and that can be utilized by cannabis businesses.

“We did not foresee that being a loophole. It was supposed to revitalize neighborhoods,” he pointed out.

“Your voices do matter. This is a common sense approach,” Quintero added before the vote.

2nd Ward Councilwoman Tiffanie Fisher and Councilwoman-at-Large Emily Jabbour co-sponsored the measure and thanked everyone for working together on it.

Russo was the lone council member who came out staunchly against reforms, claiming many in the room were not familiar with the benefits of cannabis.

“I am absolutely 100 percent against making this change. I don’t believe anyone else in this room has had to treat a six year old who was a severe epileptic who couldn’t control their seizures. I don’t think anyone in this room has had to treat anyone who is emaciated full of cancer. A lot of those residents and a lot of those patients don’t want to come before this council and talk about their condition,” he exclaimed.

“Three years ago, this room was packed with 400 people and everyone one of those people was 100 percent supportive, including council members, of voting for cannabis dispensaries in the City of Hoboken.”

Russo also brought up that over 70 percent of Hoboken residents voted in favor of legalizing marijuana in the November 2020 ballot referendum, questioning why no one ever had issues with the location until now.

The ordinance, along with an amendment, both passed 8-1, with only Russo voting no.

1st Ward Councilman Mike DeFusco and Fisher participated in the meeting remotely, while the rest of the council returned in person for the first time since the COVID-19 pandemic began.