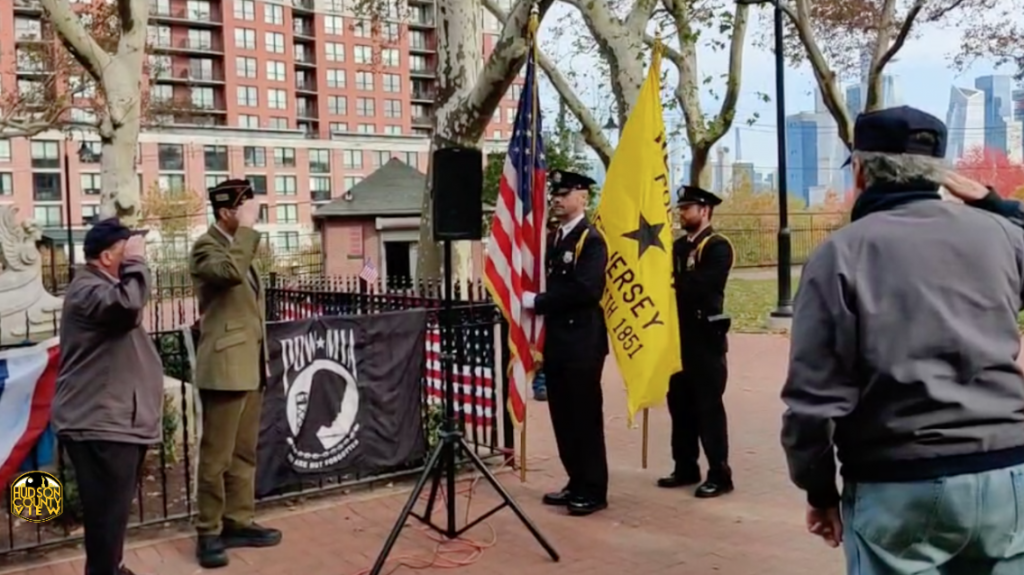 “Some of us enlisted. Some of us were drafted, but the bottom line is we served. Veterans are defending us 365 days a year. Their heroism has been demonstrated time and time again,” said Post Commander John Carey.

“Sometimes that heroism has gone unnoticed by those of us who enjoy the security that their sacrifice has provided … May we never forget. May we always remember the great sacrifices that they have made. Especially those who have given their lives: We must appreciate their sacrifice and we must thank them.”

Mayor Ravi Bhalla spoke during the brief ceremony and acknowledged the great sacrifices veterans have made.

“I ask that we all remember the men and women who gone on to foreign lands to defend our freedom. They say freedom is never free,” he said.

“The cost is to the veterans their families, their spouses, and their children. It takes a huge toll in my observation the entire community for someone to go abroad to serve so that we can be free. And we should never forget that.”

Bhalla also said he was grateful to the American Legion for spearheading an effort to assist homeless veterans.

“On behalf of the city, please know we are here with you today and every day,” he added.

American Legion Finance Officer Mark Villamar noted next year will be the 100-year anniversary of the World War I statue in the park where the ceremony took place being erected.

“When we came back from Vietnam, the reception we had was quite different than what we are receiving today. Personally, that’s very warming to me,” he said.

“That will enable us to get services from the Veterans Administration to these individuals in need,” Villamar said.

He noted they are raising money for the project, which will cost about $3 million.

“I hope you can join us in that effort: we’re about a third of the way there,” noting that they will likely break ground by the end of the year.

“It’s important that this ceremony be kept so the sacrifices were made are never forgotten,” stated Hudson County Commissioner Anthony “Stick” Romano (D-5).

At the end of the ceremony, they played a recording of the poem In Flanders Field, which commemorates the sacrifices World War I veterans made.

The ceremony streamed live on our Facebook page and can be viewed here.

In the past week, Hoboken reports just 16 new cases of...