In a photo finish that took the Hudson County Board of Elections an additional two weeks to certify, West New York Board of Education President Adam Parkinson won the third seat up for grabs – edging out Alex Navas by just five votes. “I’m blessed that the community has once again entrusted me to serve on the West New York Board of Education. I would like to congratulate all the candidates who ran, including Mr. Scheurle and incumbent Trustee Morel, who were also victorious,” Parkinson, 21, told Hudson County View in a text message.

“Over the next three years, I will continue my pledge of putting children first in every decision I make. I am confident that we will continue making the necessary improvements for the West New York School District.”

After the smoke settled, Parkinson, of the Children First team, bested Navas, of the Save Our Schools slate, by an incredibly slim margin of 2,643 to 2,638 after the vote-by-mail and provisional ballots were counted and certified by the county board of elections.

Parkinson had an uphill climb in this election given the fact he was the last name (eighth) on the ballot, a hurdle he was also able to overcome in 2014.

Jose Alcantara, another member of the Mayor Felix Roque-backed Children First ticket, was initially ahead of Navas by a single vote (2,363 to 2,362) on the machines, but Alcantara ultimately finished in fifth place with 2,633 votes – just 10 behind Parkinson.

Scheurle, a local funeral home director and frequent Roque critic, took advantage of having the top spot on the ballot by winning definitively at the polls on November 8 and finishing in first place overall with 2,891 votes.

Morel, who was appointed to the board in May and also ran under the Children First banner, came in second place with 2,710 total votes.

Navas did not immediately respond to a request for comment. 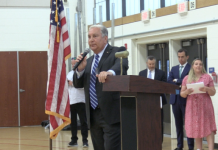 At Hoboken Council debate, hatred between Giattino and Garcia is palpable