Members of the Guttenberg council, as well as the local Democratic committee, distributed 125 turkeys on behalf of Mayor Gerald Drasheff and the entire governing body on Tuesday. Sponsored Content.

“Actually, what we’re trying to do is just go around and distribute turkeys and the trimmings for town residents that are in need of it this year and it’s something that’s really near and dear to our hearts,” said Councilman John Habermann, who was assisted by his daughter as turkeys were given to residents at 400 68th Street.

Habermann further stated that all the meals were being distributed free of charge, and although the Guttenberg council had done this several times in the past, he said this was the largest scale, most successful one yet.

“We have a list that we generated throughout the town, for families that are in need. Between the mayor and council, we came up with some funds to purchase the turkeys and distribute the families that were in need,” added Councilman Wayne Zitt.

William Hokien, a Guttenberg committeeman who was elected to the board of education on November 8, added that the local Democrat party compiled their own list and was helping hand deliver the Thanksgiving meals as well. 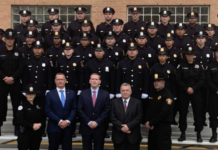