No injuries were reported after a three-alarm apartment fire flared up in Hoboken early this morning, officials said.

The Hoboken Fire Department responded to a call at 62 Monroe St. around 5:30 a.m. and it was ruled under control by 6:50 a.m., according to the city’s official Twitter page.

Also on Twitter, Mayor Dawn Zimmer thanked first responders, including firefighters, police and the office of emergency management, for a timely response that saw everyone – including pets – evacuated safely.

HFD is responding to a fire at 62 Monroe St. Monroe St is closed Observer-Newark. Observer is closed Madison to Monroe.

Thanks to HFD, OEM and Police for fast response to fire early this am on Monroe St. Thankfully everyone, including pets, got out safely.

Roads closed as a result of this morning’s fire at 64 Monroe Street have been re-opened. Wishing everyone a safe weekend. 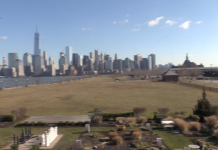