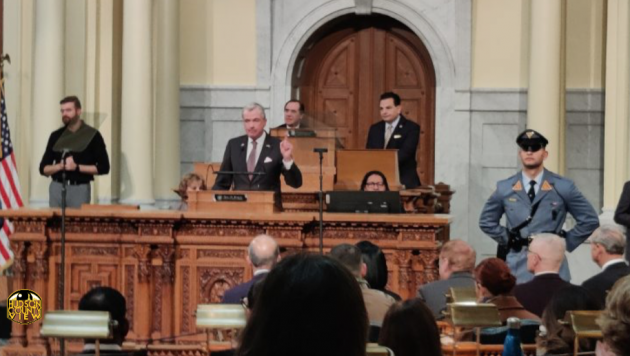 “We are building the next New Jersey. A New Jersey with more possibilities. New Jersey is truly the embodiment of that state of opportunity,” he said.

In comparison to last year, “we are stronger, and we are fairer,” Murphy said.

Early in the speech, Ukrainian soldiers protecting the country against the Russian invasion were touted.

“With us, as well, are Ukrainian Consul General Oleksii Golubov and four members of the Ukrainian Defense Forces who were wounded in battle and have been receiving treatment in the United States,” he explained.

“New Jersey proudly stands with the freedom-loving people of Ukraine in this moment of crisis and will do so for however long it takes.”

Murphy highlighted progress on the Garden State Greenway project, which entails “the conversion of nine miles of abandoned railroad trackbed from Montclair to Jersey City into a linear park that will rival any other of its kind, dwarfing Manhattan’s High Line.”

He noted that the High Line is four-and-a-half miles in comparison.

“Are you kidding me? Come to Jersey,” Murphy joked.

“I must give a huge amount of credit to the team at the Department of Environmental Protection. This project exemplifies our belief that we can take previously underutilized or overlooked properties and turn them into points of civic pride to better our communities and environment,” he explained.

“It exemplifies our commitment to environmental justice.”

“We finally broke ground on the new Portal North Bridge. I was tremendously honored to have President Biden by my side when we ceremonially did so,” Murphy said.

“The project to build those long-awaited new rail tunnels under the Hudson River also moved forward. Because of our partnership with New York, Amtrak, our Congressional Delegation, and this White House … we recently received a $292 million federal grant, the first of what we anticipate to be many awards to get this project done. It will mean fewer delays.”

“People from all across the northeast, and indeed from across the country, are coming to taste what is being poured from bottles, taps, and barrels across New Jersey. It is absolutely imperative that we keep this renaissance going,” Murphy added.

He noted he plans to reform liquor licensing so more restaurants could get a liquor license which could cost $1 million.

He added it would create 10,000 jobs a year and generate billions of dollars. Murphy noted there is currently one per 3,000 residents license law administered by towns which they plan to expand gradually to reduce the limit.

There will be a tax credit for restaurants that spent the money on a license.

He said they plan to eliminate the restrictions on craft breweries as well.

Murphy said he would be back to unveil the state budget in seven weeks. Members of Hudson County’s Assembly delegations had issues they wished to see addressed in the coming year, particularly in the budget.

He is poised to become the state senator of the new 32nd Legislative District after legislative redistricting.

He also noted the budget discussions will go into full force in May and June since New Jersey’s fiscal new year begins July 1st.

Assemblyman William Sampson (D-31) wished to “help our students in the education system in the public school system.”

“Jersey City needs a lot of help in school funding. So I would love to see the public education keep the thing they need,” he added.

He noted previous administrations have made the situation worse.

“We still have to find a way to move Jersey City forward.”

She also noted she has a bill to address food insecurity, which is one of her top priorities.