Former U.S. ambassador to Germany Phil Murphy may not have had the political muscle of other gubernatorial hopefuls, but he had the perfect game plan (and bank roll) to take every potential opponent out of the race with pinpoint accuracy. 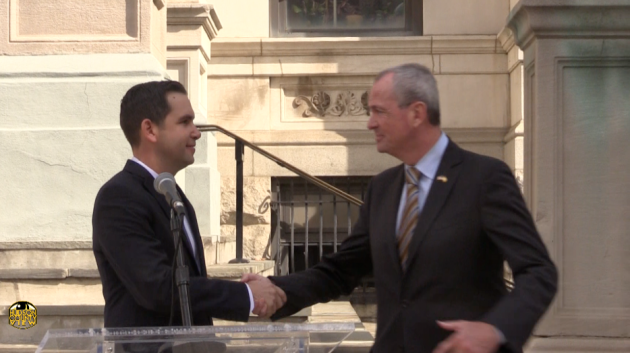 After at least two years of kissing babies and shaking hands from Atlantic City to Wykoff, as well as a pretty well-funded super PAC, Jersey City Mayor Steven Fulop appeared to, at worst, be poised to run a competitive campaign for governor.

Fulop was riding so high, he even slammed Murphy for filing a complaint with the New Jersey Election Law Enforcement Commission (ELEC) over his 2017 fundraising efforts.

Despite this fact, in one of the more bizarre, unexpected political twists of the year, Fulop called a press conference on the steps of City Hall to endorse Murphy and announce he’d be seeking re-election.

When asked about the aforementioned remarks to Hudson County View about Murphy’s “desperate” campaign, Fulop essentially said that’s politics in NJ and they both got over it.

Many politicos hypothesizes, theorized and/or hoped that Fulop’s sudden change of heart meant his career was quickly going to be put on life support, perhaps by having to testify in the Bridgegate trial (he didn’t), but so far, that hasn’t happened.

As a matter of fact, less than a month later, all of the top Hudson pols showed up at a Fulop fundraiser, with the vast majority stating that the mayor is the best thing for Jersey City.

With that in mind, one thing that was a little lost in the shuffle was how strong Murphy had gotten seemingly overnight.

Quietly hiring one of the more robust political brain trusts in recent memory, as well as strategically wooing powerful politicos in Essex and Bergen County, Murphy suddenly didn’t have much serious competition in front of him aside from state Senate President Steve Sweeney (D-3).

However, that matchup also wasn’t ever meant to be, as Sweeney also decided not to seek the state’s top elected office, and while he was never viewed as a serious contender, state Senator Ray Lesniak (D-20) doesn’t appear that he will throw his hat in the ring, either.

When the smoke settled, what appeared to be a dog fight of a Democratic gubernatorial primary on paper almost instantaneously transformed into a glorified sparring match at best.

The fact that he also received the endorsements of nearly every top local Democratic party and union in the state fully explains why only Assemblyman John Wisniewski (D-19) has opted to give it the old college try against the former Goldman Sachs executive.

Even if the predictable result occurs in June with Murphy steamrolling Wisniewski in he primary, he will face a test from the Republican side in November, likely in either Assemblyman Jack Ciattarelli (R-16) or Lt. Gov. Kim Guadagno.

If Murphy cake walks his way to Drumthwacket, pundits will have to wonder about the foreshadowing nature when Prieto said the governor’s race goes through Hudson back in March.

Mukherji: This gov race ‘is a referendum on the election of...