The Jersey City Planning Board voted to approve a new building at 25 Clinton Ave. in Ward F last night despite several objections from residents in the community. 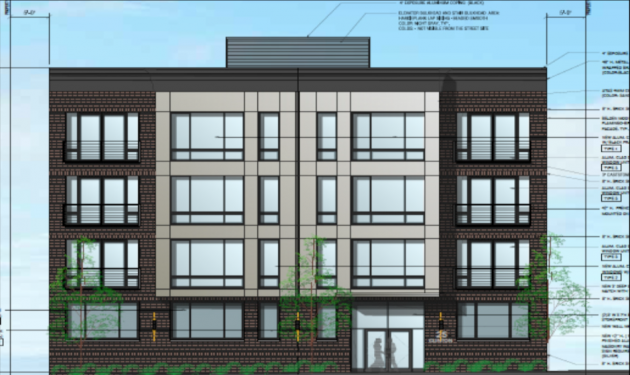 The proposed 10,678-square-foot building faced sizable public opposition since it would contain no affordable housing or designated parking for the 30 units the building.

In addition, many thought its modern edifice would clash with the historic nature of the Bergen-Lafayette neighborhood.

“Is there any way we can consider parking? Are they willing to meet with the community so we can find common ground?,” asked Ward F Councilman Frank “Educational” Gilmore.

“My client has instructed me this is an as of right project,” said attorney Elnardo Webster.

Gilmore asked if the developer would meet with the community, to which Webster said he was instructed to proceed.

“As the councilman for the area I just can’t support this project. I just can’t understand how individuals who want to develop don’t do a community meeting. It’s everything wrong with the development which we don’t want to see. He doesn’t even want to meet with the community. That’s really alarming,” Gilmore said.

Other residents who called into the virtual hearing shared that perspective.

“Every developer has had a meeting with us. This is the first they time they scooted around us here and just brought it to you guys,” stated Jocelyn O’Keefe.

“This is one of the most beautiful streets in Jersey City. Try a little harder to come back with a design that looks like this area. And why are there no affordable units? Was it grandfathered in?”

Teresa Nyatome said the project was motivated by “pure greed” and took none of the existing residents into consideration.

Lindsey Sigmund, the environmental planner for the city division of planning, noted that the site has been vacant for 20 years after the former building was abandoned.

She explained the developer is using the grandfathering non-conforming rights to propose a building that resembles the building in size that previously occupied the site.

“The four stories is conforming. Staff recommends approval as this is an as of right project,” she said.

“Can you just comment on that, affordable housing?,” Commissioner Vidya Gangadin, a former board of education president, asked.

Sigmund noted the development plan was submitted in 2020 long before the latest Inclusionary Zoning Ordinance (IZO) was passed at the end of last year.

Moreover, because the developer was not seeking a variance, the planning board could not hold them to a higher standard.

“We have gathered community input. We’ve heard quite a few people including block groups,” Commissioner Steve Lipski, a former Ward C councilman, added, also inquiring if notification of the project was provided to locals.

Sigmund noted only property owners within 200 feet were notified.

“It seems the only opportunity to voice their concerns was tonight,” Lipski said.

“Right. The information was available on the data portal. We always ask if a community meeting was held,” Sigmund stated.

Lipski noted aesthetics are an issue during planning board discussions and asked if a community could be held.

“My client is driving the process. They believe they’ve waited two-and-a-half years and gone through an extensive process for the JCRA (Jersey City Redevelopment Agency). They’ve asked me to ask for a vote this evening,” Webster replied.

“Can this board see if the facade could be brought into the neighborhood and its liking? I think it’s great an empty lot now is going to be developed. But when you have a councilman and block association heads [opposing] … I think it defeats our purpose. Why have a planning board when it’s of right? Could this application be postponed?,” Lipski continued.

Board Attorney Santo Alampi said that while community meetings are encouraged, and it’s “disappointing” when they don’t happen, neither those or designated parking spots are required.

“Counsel, has your client attempted to meet with the community?” Lipski asked.

“My client has said he has not attempted to meet with the community,” Webster responded.

Lipski continued that he still believes they should do so, even if it’s not required, prior to a vote.

“I don’t think it’s grossly inappropriate for the client to meet with the community and delay it for one meeting.”

“This is an as of right application. That’s what we need to take into consideration. While the developer should have engaged with the community, we have no oversight of that,” said Vice Chair Orlando Gonzalez.

Lipski called it “distasteful” for the developer to not meet with the community once before abstaining.

“The developer should have talked to the community. All the rest is according to the law so we can’t do anything. I vote aye,” Commissioner Dr. Vijaya Desai said.

“Sometimes some projects just don’t belong there. I’m going to vote no on this project. It’s really beautiful and I hope they take that into consideration,” stated Commissioner Joey Torres.

Gonzalez argued they have a narrow jurisdiction of oversight and voted for aye.

Ultimately, the resolution passed 3-0-(1), with Lipski abstaining and Commissioner Jeffrey Allen recusing himself from the matter.