The Jersey City Historic Preservation Commission okayed a “courtesy review” for the renovation to the Landmark Loew’s Jersey Theatre in Journal Square at last night’s meeting, where several commissioners sought more details on the project. 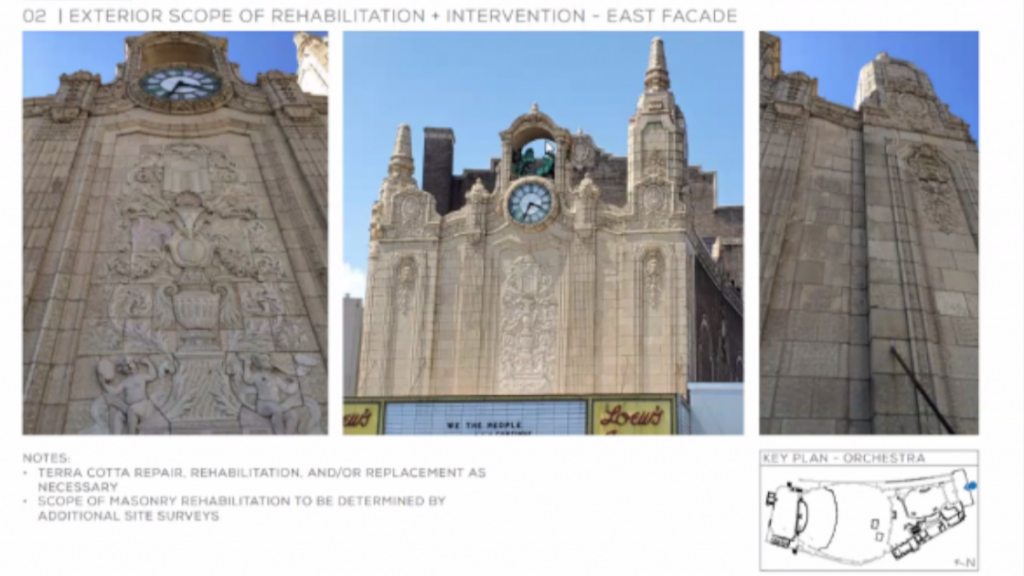 They did not have the authority to block the project and therefore many referred to it as a “courtesy review.”

There will be an extensive renovation and restoration of the interior and exterior of the 92-year old building. Devils Arena Entertainment (DAE) is paying a projected $72 million renovation bill that was initially given a compleion date in 2025.

DAE attorney Frank Regan said the theater’s renovation could serve as the catalyst for an artistic renaissance of Jersey City.

The Jersey City Planning Board sought a review of the renovation project by the Historic Preservation Commission prior to their own hearing.

Gary Martinez, of OTJ Architects, noted a lot of renovations are needed, though the theatre is in better shape than others he has worked on with more historic original material that can be left in place.

He also noted the need to repair the extensive terra cotta brick. However, they need to do more surveys.

They want to make sure everything is safe and loose pieces are removed.

An old cooler tower and water tower will be removed so new infrastructure can be placed there if necessary.

Martinez later explained they need to ensure there are no water leaks through the terra cotta edifice.

To address a report by Friends of the Loew’s that air comes in through a side door the way it’s designed, they want to create a doorway vestibule, along with adding an elevator for the disabled.

Martinez said the new side door would help with traffic in the winter.

“Only so many people can come through the front door at one time,” he said.

They know the fire escape stairway has to be replaced and two new loading doors would be added.

They are also going to change the seating to make it viewable by everyone. A lot of work has been done to preserve the ornate ceiling. They want to be very delicate.

Commission Chair Brian Blazak asked if they were going to apply for tax credits, to which Regan responded that  they’re exploring numerous funding sources including historic tax credits.

From there, Commissioner Austin Sakong said the presentation was too broad.

“It really is the details,” he said, noting there was an “absence of all the things we typically demand of our applicants.”

“In the absence of all those things, how do you propose we review the application without being a rubber stamp,?” Sakong continued.

Martinez acknowledged his remarks and said that renderings would be made available as the project moves forward.

“We’re long on story and short on details,” he admitted.

Regan said they are on schedule to have the project completed by January 2024.

“I’m not sure what it is I’m voting on. What is the finished product we’re getting in terms of level of quality, level of completion?,” added Commissioner Stephen Gucciardo.

Martinez sought to assure them of the process and noted they will work to restore it with great detail.

“These plans are more conceptual than we’re used to,” Blazak said.

The commission agonized over the nature of the project for several minutes given the lack of details.

“It could be catastrophic or glorious,” Historic Preservation Officer Dan Wrieden said.

Regan noted the planning board will review the plan next.

Friends of Loews Executive Director Colin Egan said he has been involved with the preservation of Loew’s Theatre since 1987 and explained they have worked hard to preserve the building.

“We are very, very happy to be at this point working with the city,” Egan said.

He noted they will continue to provide programming and preserving it as laid out in the Developer RFP.

Egan acknowledged it’s an early part in the designs, but said he had confidence in the plans.

However, he wanted the center aisle maintained which would be removed in the redesigned seating. In addition, he didn’t want a TV permanently mounted in the lobby.

“I too have concerns about the exactness of what is being planned,” Egan said.

Senior Historic Preservation Specialist Maggie O’Neil noted other agencies are reviewing the plan and will take their notes into consideration. She noted the theatre is part of the 2060 Journal Square Plan.

O’Neil spoke well of the plan, saying “We’re very satisfied with that.”

She added they were upset the plan says “demolish too much because they want to restore the theatre.”

O’Neil said they agreed with Egan on maintaining the center aisle of the theatre.

After a great debate while reviewing the plans, they resolved to ensure that the state preservation office would allow them to review the completed plans in October to ensure they’re complete.

“We’re happy to come back,” Regan said, prompting O’Neil to not they sought timely updates.