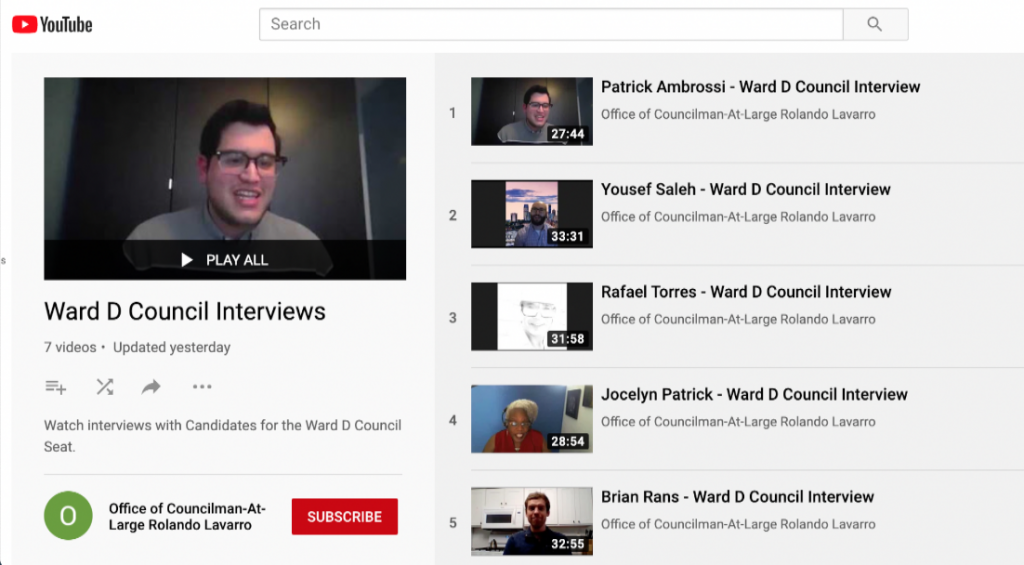 Several residents wondered if the interviews, announced on Friday, would continue as scheduled after Council President Joyce Watterman and Mayor Steven Fulop endorsed Saleh on Monday ahead of a special meeting where the council will vote on his appointment.

Some of the questions related to why they are qualified to run and serve on the governing body, as well as the most important legislative priorities they would pursue.

First up was Ambrossi, who said he was qualified to run because he’s served on multiple boards such as the Jersey City Reservoir Alliance and was their treasurer. Also, he’s worked on several political campaigns, including Yun’s first council race in 2013.

He noted that his top three legislative priorities would be shoring up the city’s budget, affordable housing, and providing COVID-19 relief to small businesses.

“With the city budget, we’re going to have make tough decisions, cuts are going to have to be made, making the cuts in the right spots will be necessary, but I want to make sure that city employees keep their jobs,” said Ambrossi.

He also noted that he’d like to expand inclusionary zoning to address the affordable housing crunch in the Heights.

As for Saleh, he described himself as a friend Yun’s and that he’d have some big shoes to fill.

He also noted that closing the city budget shortfall, estimated to be in the ball park of $70 million due to the coronavirus pandemic, is paramount.

“I’d like to establish a strategic rainy day fund making sure we have the finances to face any future calamity,” Saleh noted.

“Also, we may have to do some cutting on our end with any extraneous expenses we can find. We’ll need to be creative, and we’ll need to make some tough decisions on how we close the budget gap.

He’s also in favor of inclusionary zoning, but doesn’t believe it’s a cure all. Rather, it should only be used on case-by-case basis.

“I’m a landlord, but I’m an advocate for Solomon’s attempts to expand rent control. Landlords can’t be abusing their tenants and we have to make sure that rent doesn’t rise past a certain percentage unless there are certain, significant capital improvements made,” noted Saleh.

Another potential Ward D council representative, Jocelyn Patrick said she’s uniquely qualified to fill the seat because she has the experience of serving, first, as treasurer of the Riverview Neighborhood Association, and now as president.

She added that she would follow through on some of the work left unfinished by Yun’s passing such as removing the penalties for late or no payment on property taxes due to the hardships caused by COVID-19.

Furthermore, she highlighted a willingness on working on reforms to eliminate nepotism for highly coveted jobs at City Hall.

Meanwhile, candidate Brain Rans, also a member of the RNA, said he’s interested in running for the seat because he’s passionate about civic engagement and community involvement.

Interestingly, while he noted that one of Yun’s strongest personal traits was being passionate about what he believed in, he feels that he didn’t necessarily consider all of his constituents’ perspectives on certain issues.

“I may be more collaborative, and I think he may have been aggressive on social media which I understand sometimes you need to do to accomplish things. But you don’t want to bark up the wrong tree. I’ll do my best to listen to all sides,” said Rans.

Rafael Torres ran against Michael Yun during the 2017 council seat race, and while he wasn’t particularly competitive, he’s looking for another opportunity to earn the seat.

He said he would rely on his 27 combined years of experience as a firefighter and an inspector to build consensus on the council.

Finally, Cynthia Hadjiyannis cited her work as Michael Yun’s campaign manager in 2013 as the experience she will leverage to succeed on the Council.

For her, zoning is a priority: she’d like to see the R-1 zoning ordinance changed so that it doesn’t incentivize what she calls “McMansion-like buildings” on 25 by 100 foot lots in order to retain the neighborhood’s enchanting qualities.

The special Jersey City Council meeting will be held tomorrow at 2 p.m. and will be accessible to the public through Microsoft Teams.

All six interviews can be viewed in their entirety below: