The Jersey City Council approved a resolution awarding a $15 million contract for Bespoke Health to administer COVID-19 vaccinations for the year at last night’s meeting. 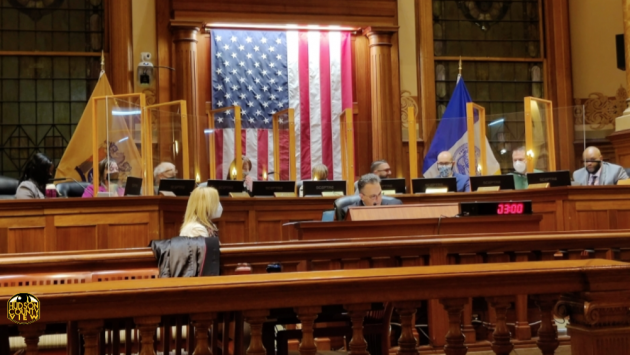 “I just don’t have enough data to make an informed decision as to how this money was spent on manpower. I asked for more ward specific data as it relates to the vaccination [rates],” Ward F Councilman Frank “Educational” Gilmore said before voting no.

At Monday’s caucus, he said that while the vaccination rate in Jersey City is around 80 percent, it is closer to 40 percent in Ward F.

Health and Human Services Director Stacey Flanagan said at the time that they are continuously working with community leaders such as pastors and seniors to encourage more people to get vaccinated.

Two other council members said agreed with Gilmore that more information would be appreciated before voting yes.

“I would like to see more of a breakdown, we need more data,” said Ward D Councilman Yousef Saleh.

“Echo what Councilman Saleh said. Just looking for a breakdown of how we get to those monthly charges,” added Ward E Councilman James Solomon.

Business Administrator John Metro said the administration would make that happen, noting that he is working on vaccination data among city employees, a concern Solomon brought up at the caucus meeting.

The measure passed 8-1, with only Gilmore voting no. The city’s contract with Bespoke last year was for $1 million.

In another issue, Ward C Councilman Rich Boggiano noted several people complained to him about being charged $12 extra on their water bills.

“It never came before the council,” he said.

“Where’s their refund when they were charged illegally?,” Boggiano asked.

“It’s all part of that calculation,” Metro said, adding the director could speak more about it.

Before the meeting ended in record time, just over 20 minutes, Saleh asked why the meeting, which was convened at council chambers, was not being streamed live.

“I received some complaints that there was no live stream,” he said.

“We do not have the ability to do it live streamed,” stated City Clerk Sean Gallagher, adding that they do not have the technological capacity to conduct a hybrid meeting.

While the meetings are typically uploaded to the Jersey City TV YouTube page afterwards, the city said on Twitter that “technical difficulties” prevented the short meeting from being recorded.

Several online expressed surprise that Wednesday’s meeting was in person only, though that was also the case for the caucus on Monday where the board mulled amending local cannabis rules and regulations, as only HCV reported.

The amendments, including expanding the Jersey City Cannabis Control Board from three members to five, were approved unanimously (9-0).