In the event that Jersey City Councilwoman-at-Large Amy DeGise doesn’t resign over a July 19th hit-and-run, 42,523 valid signatures will be needed to force a recall election next year, City Clerk Sean Gallagher said. 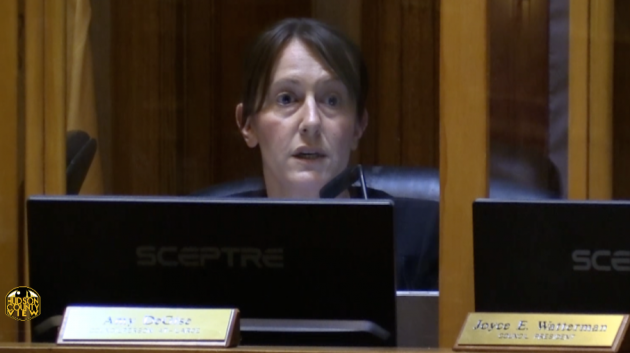 “As this Council took office on January 1, 2022, a recall cannot be held until after January 1, 2023 and the 50th day preceding the completion of the first year of the term is November 12, 2022,” Gallagher said in an email following an inquiry from HCV.

“According to the Hudson County Superintendent of Elections, there were 170,090 registered voters as of November 2, 2021. 25% of 170,090 is 42,523. Consequently, the petitioners seeking a recall must submit 42,523 valid signatures. In accordance with N.J.S.A. 19:27A-10(a), the petitioners have 160 days from the date that the recall effort receives final approval for circulation from the City Clerk.”

None of her former running mates, or Fulop, have asked her to step down following a hit-and-run on July 19th around 8 a.m.

During the incident, she hit UberEats bicyclist Andrew Black at the intersection of Martin Luther King Drive and Forrest Street after he ran a red light, CCTV footage shows. The video also indicates that DeGise did not brake during the incident.

Separate surveillance footage of the West District Police District shows that she reported the accident in person around 2 p.m. on the same day.

For the time being, only Jersey City Councilmen James Solomon and Frank “Educational” Gilmore, who defeated candidates on Fulop’s ticket last year, have called for her resignation and Solomon noted that if she doesn’t, she should be recalled.

“I called for a recall if she fails to resign because I don’t think she can serve the public effectively and I will be happy to partner with the community advocates taking the lead,” Solomon stated yesterday.

Since stating through spokesman Phil Swibinski that she has no plans to step down last week, the councilwoman has had a historically bad seven days.

On Friday, HCV first reported that she tried to get out of having her car towed in Hoboken by pulling rank and dropping names, to no avail, all caught on police body camera.

On Monday, The Jersey Journal followed up by reporting on her history of unpaid parking tickets, with a spokesman for DeGise stating Wednesday morning that she had received death threats.

That evening, the JJ reported on her living in housing intended for low-income residents, despite her household earning six figures, and then yesterday about her not paying a roughly $3,000 veterinarian bill until the court garnished her wages.

There is currently a recall effort of 5th Ward Councilman Phil Cohen in neighboring Hoboken, though recalls do not have a strong track record in Hudson County.

The most recent one was when Albio Sires was able to recall West New York Mayor Anthony DeFino in 1993, though DeFino and his board of commissioners still ended up winning the special election.

If DeGise were to resign before September 1st of this year, there would be a special election for her seat on November 8th.

In the event she resigned after September 1st, the special election would not be until November 7th, 2023 and the city council would appoint a replacement in the interim.