The lawsuit seeking to overturn the Jersey City redistricting map approved at the beginning of the year ended with a judge deciding not to immediately rule on a motion to dismiss after about two hours of oral arguments. 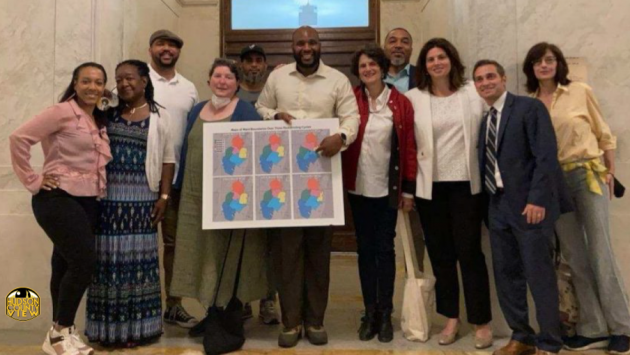 The map was approved on in January by the Board of Ward Commissioners, despite three hours of uniform opposition against the proposal.

As a result, Ward F Councilman Frank “Educational” Gilmore and over a dozen community groups filed a lawsuit in March to get the new map thrown out.

“There was no meeting that occurred where there was a majority defendant attorney,” Jason Orlando, a partner at Murphy Orlando LLC who is representing the city, argued.

He also noted that three meetings were held on the subject in December, followed by two more in January.

“There was no action taken between the meetings. And if one did, the 22nd served as a corrective meeting. We’re happy to defend on the issue,” Orlando asserted

“What they suggest is a violation of the spirit of the law of the Open Public Meetings Act (OPMA): All the meetings have to be open to the public,” Brett Pugach, of Bromberg Law LLC and representing the plaintiffs, said.

“There was one map selected to present to the public to the exclusion of other maps. There were stakeholders whose views were taken into the decision. Decisions were made. It wasn’t just people bumping into each other.”

Orlando argued an exception to the OPMA would be legislative caucus meetings and working sessions, noting that city council subcommittees often meet in private.

“They circumvented on purpose. People left deliberately. In none of the meetings was the map discussed. Nobody asked a question,” plaintiff James Calderon stated.

Hudson County Superior Court Judge Joseph Turula said that preserving Bergen-Lafayette as a Black neighborhood was one of their arguments. At the same time, he said Paulus Hook was founded as a Dutch settlement, but the demographics have changed.

“Race does come into play,” Pugach replied, also arguing that the area has a commonality of interests in housing, income, and environmental issues.

“The community banded together for electoral victory,” Pugach added, speaking of Gilmore’s upset victory over his predecessor, Jermaine Robinson.

Turula then questioned if they truly did not have a voice at the table now.

“When those communities of interest are torn … it takes away their ability to achieve effective representation,” Pugach explained.

“Why can’t that occur?” Turula asked.

Pugach argued they were grouped with communities that did not have similar interests, to which Turula acknowledged the difference between living in a luxury skyscraper downtown and those living in more humble circumstances.

“It’s a totally different world,” the judge said, with Calderon chiming in that “Ward F was diluted” with the new map.

However, Orlando said that given Jersey City’s robust population growth in the past decade, few options existed to give each ward a similar amount of residents.

“There was explosive population growth. You have to make tough decisions. There’s no recourse. It’s their decision,” Orlando said, also indicating that redistricting often brings out partisan issues that were not for the court to decide.

“This involves a nebulous concept of ‘communities of interest,’” Orlando said.

“It could be a gut feeling,” Turula replied about such communities’ boundaries.

Orlando said even if his district was changed, Gilmore could still raise issues that he wanted to discuss, also postulating that splitting the community gave them better representation.

To that end, Orlando not that state redistricting put state Senators Nick Sacco (D-32) and Brian Stack (D-33) in the same district (the 33rd), effectively forcing Sacco’s retirement next year.

“Ward E is simply not compact,” Pugach continued, further stating it is “bizarrely shaped” with “37 sides.”

Orlando of course disagreed with that assessment, again reiterating that population discrepancies had to be distributed evenly throughout the wards.

Renne Steinhagen, of the NJ Appleseed Public Interest Center, another attorney for the plaintiffs, stated that Ward F’s population largely remained the same.

Pugach argued that the Ward F boundaries were changed to “nullify the electoral victory” of Gilmore,” noting that the Sci-Tech City and Morris Canal Manor projects that he opposed were suddenly moved to Ward A.

“Retaliation is being alleged. It’s absurd,” Orlando quipped back.

“This is a monstrosity: It’s not compact. Let’s do discovery. Let’s do deposition. There’s certainly some smoke there,” added another plaintiff attorney, Bill Matsikoudis, a founding partner of Matsikoudis & Fanciullo.

“If anything, rights have increased: They did what they’re supposed to do, ” Orlando responded.

Ultimately, Turula said he would review their arguments and come up with a decision after today, likely sometime next week, though did not rule out taking up to two weeks.