Hudson County officials cut the ribbon for their fair at James J. Braddock Park in North Bergen last night, marking the 7th time the event has launched since 2015. 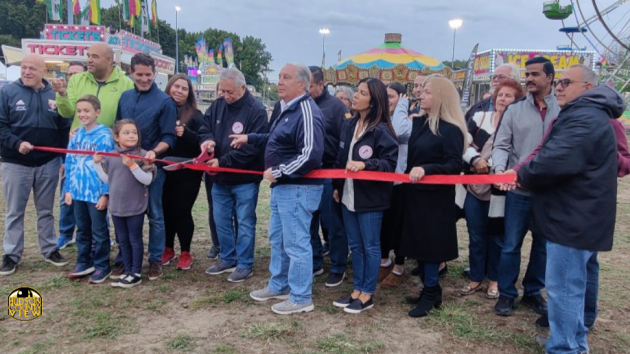 “I think it’s a throwback to old North Bergen where at one time there was a racetrack and there was a carnival that was year round. This is just a great event and entertainment,” said state Senator (D-32)/North Bergen Mayor Nick Sacco.

Sacco credited Hudson County Board of Commissioners Chair Anthony Vainieri, also the chair of the county Democrats, for bringing the event back and keeping it a regular.

“This is seven years that we have done this. The North Bergen Education Foundation is the permit holder: it’s their carnival. They hired McCafferty Enterprises. They own the rides,” Vainieri noted regarding the logistics of the event.

He continued that along with local businesses, North Bergen CARES would be at the fair, along with a beer garden for people to enjoy.

For entertainment, there would be a DJ and bands, including the North Bergen-based Past Masters.

“It’s a great night. It’s going to be a great week for people. It really is,” the chairman added, as well as that that the Past Masters band would perform, along with Elvis and Elton John impersonators.

The fair is not opening until 5 p.m. this evening due to the inclement weather.