The Hoboken Planning Board had an over six-hour session for their fourth Story Dispensary hearing where opponents again took the time to question professionals. 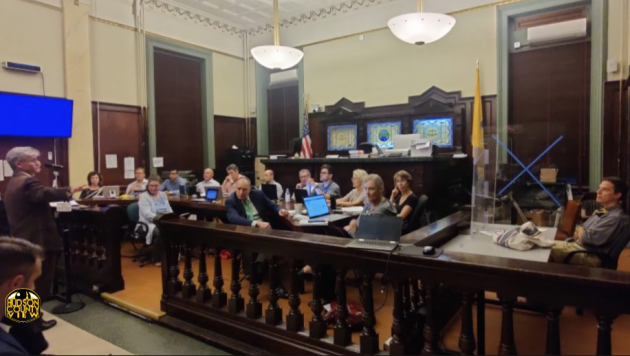 The third and most recent hearing was in June, shortly after the  application was approved by the Hoboken Cannabis Review Board in May.

Story Planner John McDonough began his testimony by referring to the former Hudson Tavern, located at 51 14th St., as a bar, which upset many in the audience since the establishment served three meals a day and was family oriented.

“I believe it was a restaurant that had a bar,” Commissioner Jim Doyle, also a councilman-at-large, said.

“The name was tavern,” McDonough responded, noting that their hours of operation where the same as any other bar.

Additionally, he stressed that they had no consumption area planned and that it will be a strictly takeout business, as well as that having multiple registers would prevent lines from forming outside – a major concern among regular speakers at these hearings.

“This application as a whole will promote the general welfare: it’s already on the street. We put real good safeguards here to ensure safe access,” he said about cannabis.

Martin Cabalar, counsel for 51-53 14th Street Condominium Association, Inc., asked if there was any testimony on how the product would be delivered during the CRB hearing.

“I don’t remember discrepancies between that and the testimony offered here,” McDonough answered.

“The law is clear in a conditional us … That the board cannot thereby impose extra special conditions. However, this board can impose reasonable conditions with respect to the site plan and loading variance,” Story Dispensary attorney Lauren Tardanico chimed in.

The issue of on-site consumption once again arose, to which Tardanico again said there would be none and would have no problem putting that in writing.

“Did you factor in that there’s about 4,000 units and 7,000 people that live within two blocks of this location?,” 2nd Ward Councilwoman Tiffanie Fisher asked McDonough.

“My analysis is narrowly focused on analyzing the ordinance,” McDonough replied

“Did you factor in the childcare facilities … within a block of the facility?,” Fisher continued.

“This was deemed the permitted use,” McDonough shot back.

Fisher remained unrelenting, asking if he had worked on an adult recreational dispensary in another location with this much residential density and pre-schools, to which he said he had “not done an analytical comparison.

“Did you know this area is three times the average density of Hoboken, which is the second most densely populated city in New Jersey?,” Fisher continued.

“I don’t know about your numbers, I do know about your great place. I think it’s right on the purpose of the C-3 [zoning]. The zoning came on the heels of that Master Plan element. There’s no break in the chain,” McDonough said.

At that point, Tardanico objected, stating that the zoning aspect had been established already. Fisher then asked if McDonough considered himself an operational use expert, to which he said he was not.

Fisher also asked about how they would limit traffic and volume to the establishment.

“Intensity of use is relied on the testimony of our operational witness. He operates these types of facilities. He patiently answered questions over and over again on how he would operate so that the queue would not fall out into the street,” McDonough said.

“I would object to this line of questioning,” Tardanico jumped in.

“We can guarantee there is no queuing,” McDonough repeated.

“Do you agree with the architect who said this is already a busy intersection?”

“I would agree. ‘Busy’ is a subjective term [but] it is an active area,” McDonough responded.

“Do you think this type of business will bring business to an already busy street?,” Brennan questioned.

“It is consistent in the plan for the area and the nature of the area,” McDonough said.

Elizabeth Urtecho, who had challenged the recently approved Blue Violets application, asked if anything had been done to accommodate residents.

“There are controls in places, yes,” McDonough said, explaining there were provisions in place to dull the noise and smell, along with a separate door.

6th Ward Councilwoman Jennifer Giattino said she was looking for their parking garage contract in their application and could not find it.

“Does that allow that they can load and unload products in the garage?,” Giattino asked.

Near the end of the hearing, Cabalar argued they were not allowed to have armed guards unload cannabis products in a parking garage.

“Do you see the word delivery? And the word armed guards?,” he asked.

“No, it’s 15 regular spaces related to the use. There’s testimony on the record,” McDonough stated, with Tardanico adding that Little Man Garage has not objected to them doing that.

“There is no contrary testimony,” Magaletta asserted.

“There’s no foundation to establish that agreement and arrangement does not exist,” Tardanico said.

Cabalar also sought to argue they were not allowed to have a basement.

“It is very, very common to have ancillary storage. I think this argument is absurd,” Tardanico responded and Board Counsel Scott Carlson quickly asked them to move on.

Around 11 p.m., Cabalar called his own traffic engineer, Keith Bergman, as a witness.

Bergman, who had experience in other state cannabis markets, argued Story should do a traffic study of the area since it is so dense versus relying on an expert handbook as the Story traffic engineer did.

“The impact is significant,” Cabalar said as part of his argument.

Tardanico argued a tavern was a bar and a restaurant, and thus a dispensary would have a similar amount of traffic.

She submitted a floor plan of the tavern submitted by Brennan to the liquor board, which showed there was equal floor space for both a bar and a tavern.

The hearing concluded after 1 a.m., with Cabalar eager to call another witness at the next hearing.

Magaletta said he had hoped to begin general public comment at the late hour, but noted it would not be fair since many had left already. The next hearing for the applicant will be on November 1st.