The Bayonne City Council approved a bond ordinance for $18,075,000 in capital improvements and equipment, while voting down a measure that would’ve allowed public comment on the first reading of ordinances at last night’s meeting. 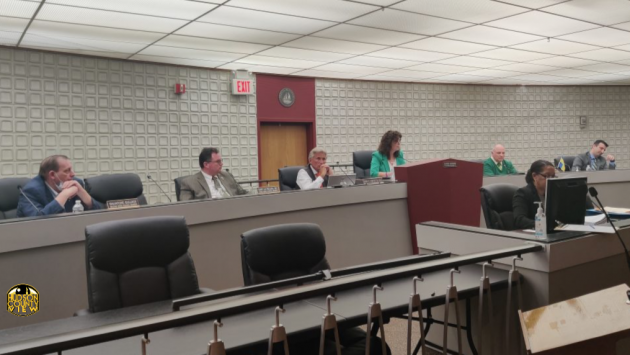 “The sweepers are older vehicles. They’ve been breaking down. The three biggest we have are 1989 max. We put them back together with bubble gum every year. They need to be replaced,” replied Department of Public Works Director Tommy Cotter.

She asked again if the fleet was being expanded, to which Cotter joked he would happily accept more vehicles.

Among the trucks that will be replaced is a Fire Truck from 1997 made of obsolete parts.

Cotter also noted they are working on creating a traffic light on 49th Street.

“Mr. Grimes was an advocate for that. So I’m sure he’s happy,” he said regarding outspoken cannabis and disability activist Edward “Lefty” Grimes of Sativa Cross, who brought other activists to the meeting.

Cotter explained that they are also looking to replace a traffic light between 30th and 39th Streets, but did not want to specifically say which one until it received public approval.

“It was agreed upon … to have a traffic light on 4th Street … that still hasn’t appeared yet. Any reason why?,” resident Mike Morris asked.

“I don’t know. I asked the same question. I’m a witness to that every day,” Ashe-Nadrowski said, noting she lives near there and people speed through the intersection.

“The administration has to actually execute on the administrative side and get the traffic lights and hold the developers accountable.

The bond for infrastructure improvements passed unanimously (5-0) on second reading.

Later, Grimes also complained about traffic on Avenue C and the lack of stoplights on several intersections during the public comment period. To illustrate his point, he set up a diorama of the intersection of Avenue C and 49th St.

“Two years ago, a man was killed on 23rd Street. There’s a lot of wheelchair issues in Bayonne,” he explained.

Grimes lamented that many private businesses, as well as public buildings, are inaccessible to those in wheelchairs.

He played a song called “Keep your Wheelchairs Home” to the council and began clapping along and singing, “A step is a wall!” Activist Mike Vintzileos dressed as a character named “Bongholeo” and joined him singing.

“We tried everything, so I hope this goes through,” Grimes said at the end.

An ordinance introduced by Ashe-Nadrowski would have allowed public comment on first reading ordinances.

Currently, public comment on ordinances is only permitted before second reading and the measure also would not have allowed a measure to be carried or tabled without first hearing feedback from attendees.

“All of a sudden, we don’t want to have a vote on it and I don’t believe that’s fair to the residents,” she said regarding ordinances on several redevelopment projects, echoing what she said in December.

“There’s resolution after the public speaking part, and we just shut people down. We shouldn’t dismiss people just because they’re speaking,” Ashe-Nadrowski said to applause from the crowd.

She argued that this would allow encourage more public participation, though not everyone thought that would work out in practice.

“Meetings you can’t control, as evidenced tonight. I’m out of order now?,” 1st Ward Councilman Neil Carroll said when Ashe-Nadrowski glared at him.

“We just had three things adjourned, and the public didn’t get to talk on this. If the public comes here and it passed our agenda last month, the public should have a say,” she said.

Carroll said the proposal might make for a good headline, but people are free to speak at their meetings at they are.

“I don’t relish the idea of further deregulation and order can’t be provided in the
room,” he said.

During the sometimes rowdy roughly four-hour meeting, members of the audience talked over the council and had to be told not to speak out of turn.

“I think it’s redundant. We never refuse to hear anybody,” La Pelusa added.

He said even when people want to speak on an ordinance when they are out of order, they are allowed, also noting that former Mayor Mark Smith’s Administration moved public comments to the end of the meeting before voting no.

“What a shock,” someone from the crowed interjected.

“There’s nothing wrong with saying it multiple times,” Ashe-Nadrowski said about allowing people to speak twice.