The Bayonne City Council took no action on Council President Sharon Ashe-Nadrowski’s measures to start over on a large-scale project on the former Military Ocean Terminal after no one seconded them at Wednesday night’s meeting. 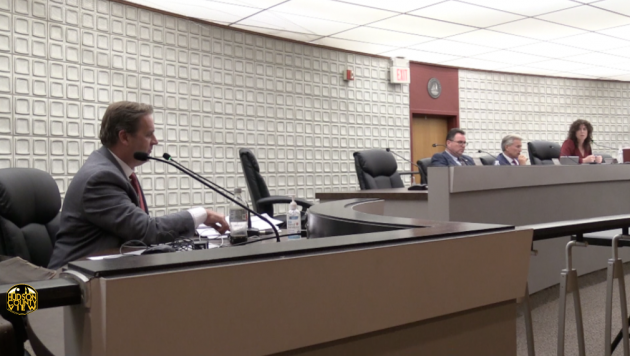 Nearly four hours into the meeting, at around 10:45 p.m., 2nd Ward Councilman Sal Gullace, who seconded the two resolutions and one ordinance sponsored by Ashe-Nadrowski at last week’s caucus, had to leave due to a family emergency.

While the local legislation was extremely unlikely to have ever passed with Mayor Jimmy Davis’ three running mates stating they’d vote against them, none of them received a second, and therefore didn’t receive a vote, in Gullace’s absence.

Nevertheless, Ashe-Nadrowski reiterated points she had previously made on the campaign trail: that the redevelopment agreement expired, that the payment in lieu of taxes deal was limited to 850 units, and that the value of the land had gone up by $60 million.

Wyciskala said that he was unaware of any changes to the financial agreement, which would have to be made by the council.

Ashe-Nadrowski noted that there was no specific allocation to the public schools, which Board of Education Vice President Christopher Munoz had advocated for earlier in the meeting to the tune of 10 percent – about $3 million.

“The PILOT as written, does not contemplate, does not have a sentence, that says a percentage is going to be brought to the school system, no,” confirmed Law Director Jay Coffey.

However, he said the council had the ability to add such a provision to the agreement if they choose to.

1st Ward Councilman Neil Carroll accused Ashe-Nadrowski of bringing up the school funding component to try and obfuscate the issue at hand.

“The headline making issue, that I believe someone on this issue is hiding behind, is the school issue: providing funds to the school based off the PILOT agreement. That is something we can work on and correct as a council going forward,” he said.

“The real issue, it pains me to say this because it’s not the first time ordinances or resolutions were introduced by a member of this council against a private individual for no other reason – I hope no other reason – than they just didn’t support that person. Because if there are other reason than that, they are far too heinous to discuss.”

Project developer Wasseem Boraie has come under the microscope since Politico reported last month that he made a $25,000 donation to the super PAC Government for the People, which was founded by state Senator Ray Lesniak to bolster Davis’ re-election.

The PAC became defunct after political consultant Sean Caddle’s murder-for-hire guilty plea went public on January 25th. He was paid $2,500 by the PAC on December 15th, about a week after he signed a sealed plea agreement with the federal government.

Carroll continued that Boraie had committed to have the project built with 100 percent labor, calling the attempt to find a new developer “an assault on them, an assault on the quality of work that can be done out there, an assault on an individual that presumably supported the wrong person … and it’s disgusting.”

Ashe-Nadrowski said she is also pro-union labor, though she felt that could be done while still supporting the public school, stating that she hoped Carroll wasn’t the one playing politics since Boraie donated to him at his first fundraiser in 2019.

“Well, we don’t know who gave to your campaign ‘cuz you won’t disclose it. Is it possible that someone has an interest in this property on the base?,” Carroll shot back, referencing the super PACs that have aided Ashe-Nadrowski’s mayoral run.

“My campaign, my ELEC form, is out there Mr. Carroll and they’re all disclosed. I don’t have a lot of money, it’s not a big campaign and everything’s disclosed – I followed all the filings,” Ashe-Nadrowski responded over Carroll.

Carroll asked about the 501(c)(4), the Committee to Advance New Jersey, which is not legally obligated to disclose their donors, to which Ashe-Nadrowski said he knows candidates aren’t allowed to coordinate with them before she said this time was not to discuss politics.

Her resolution to solicit a request for proposals (RFP) for the redevelopment of the Bayonne Bay East District did not receive a second, though 3rd Ward Councilman Gary La Pelusa made a motion calling for a percentage of the project revenue to go towards the BOE.

Ashe-Nadrowski seconded it and the resolution passed unanimously (4-0).

“Again, being one of the people that are against a lot of the PILOTs because they do short change both the county and the board of ed, I’m very happy to give them the 10 percent the way that we’re doing it. So this way there’s still a project and there’s still 10 percent going to the board of ed and I vote aye,” La Pelusa explained.

The resolution is non-binding and therefore the council would have to pass future legislation to ensure the allocation goes through.

Ashe-Nadrowski’s resolution acknowledging and declaring the redevelopment agreement with Bayonne Partners null in void also did not receive a second before 3rd Ward council candidate Peter Franco was allowed to approach the podium.

Franco, with a giant, novelty-sized check in hand referencing Boraie’s donation to the Government for the People PAC, said that the council had an ethical obligation not to vote for the project in light of the large contribution, though La Pelusa scoffed at that notion.

“It almost sounds like sour grapes: you’re running and you wish someone would give you $25,000,” the councilman said.

“No I don’t because I do things the honest way and stuff and what I would do is exactly what you did and recuse yourself, and I respect you for that,” Franco replied, referring to La Pelusa’s vote on the Caschem Redevelopment Plan earlier in the evening.

Franco continued that he still felt there was a conflict of interest.

“The issue is there’s an existing, several year old [deal] that pre-exists that golf tournament-like check … there’s nothing there right now as a conflict,” Coffey interjected.

“All of us up here won elections against people who also collected big checks from people: we’ve gotta combat with that too,” La Pelusa chimed in.

Coffey also said there would be legal ramifications for terminating the agreement with Bayonne Urban Partners Renewal and the risk of losing subsequent costly litigation is significant.

” … For me, I feel that it’s worth pursuing because it’s $60 million we’re not willing to fight for. $60 million that can really make an impact in our city to bring that in, that would be money that comes to the City of Bayonne – yes part of it going to the schools – it could help solve so many problems,” Ashe-Nadrowski asserted.

Carroll asked Ashe-Nadrowski how she came to the conclusion that the land went from being worth $35 million in 2015 to $95 million in 2022.

Ashe-Nadrowski’s ordinance to rescind their PILOT agreement did not receive a second either, while La Pelusa’s motion calling for the developer to close on the property within 60 days received the same fate.

The Bayonne Planning Board gave the project preliminary approval last week, setting them up for a special hearing on Election Day, May 10th.