The Hoboken Cannabis Review Board denied two dispensary applications and approved Blue Violets, making them the second establishment to clear the board. 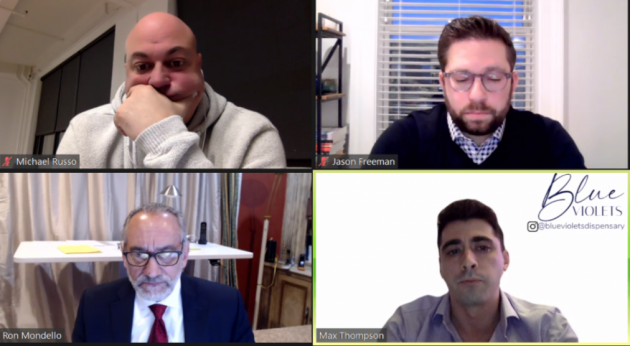 Board attorney Ron Mondello noted the initial applicant was seeking a waiver due to their location, 94 River St.

“Landlords are being a little resistant. Because it is a city that is so much smaller … we’re going to have challenges with getting us approved, and they just don’t want to allow us a space. They want to deal with applicants that are already approved,” Alyza Brevard-Rodriguez said.

She said they would have to pay $30,000 in rent without earning money to apply.

“My stance on it is … applicants have had a firm location and changing the rules … is unfair to some of the applicants in the hopper,” Business Administrator Jason Freeman said.

“I’m a no on this. Get a location, come back to us, and we’ll have a conversation. This is still a very new endeavor.”

“You’re certainly welcome to reapply once you have an LOI,” Mondello said.

Attorney Sam Redlich introduced his client Nugs and their senior partner, Nico Enea, who lives in Oakland, CA since the local partner could not make it.

“Is the backyard going to be used for anything when this becomes a marijuana dispensary?” Kyle Ceechini asked, noting he is a neighbor.

“The backyard will not be used for the business. A significant remodel would be initiated,” Enea said.

Ceechini noted another applicant was very interested in vertical integration.

“There would never be any manufacturing or consumption,” Enea replied.

Manny Rivera, a resident and former council-at-large candidate, said applicants from outside of the Mile Square City should make an effort to introduce themselves and educate the community prior to being heard by the board.

“We look forward to educating as much as possible. The local partner there has been there for 20 years and owns the building,” said Redlich.

“Let us know so we can ease the people’s fears. We need these things. It’s important to get the revenue,” Rivera said.

Frances Nicotra said while she supported marijuana legalization, she did not think the council was thorough enough in the zoning laws they okayed.

She was worried about people loitering, insinuating it would create crime.

“We have a local operator who has been here for 20 years and was looking for an opportunity. We’re in the downtown area. We’re 500 feet from any other dispensary. We respectfully request your approval,” Redlich said.

The board was not convinced the location, 128 Washington St., was a good fit for the 1st Ward.

“There’s been a shift. This would be a dispensary, if approved, very close to other dispensaries. We’re trying not to cluster them. How do you overcome that?,” Russo asked.

Freeman noted that there are already two dispensaries planned for the 1st Ward and the city can only have six total.

“I’m sorry, you did a fine job,” Mondello said.

“Any changes, they have to be heard. If it’s the same exact application, it’s ok,” Pellegrini answered.

Finally, Max Thompson served as his own counsel for the Blue Violets application at 628 Washington St.. He is the co-owner of the business with his wife Lauren.

“We are Hoboken’s only micro license applicant. We’re both the owners and the operators,” Thompson explained.

He noted his wife is a nurse who worked in hospitals and an elementary school, while he explained he is an attorney in the financial services.

Thompson continued they are Weehawken natives who have used their own savings and done the groundwork to launch their business.

“Being that you’re relatively close to a school, what’s your response to the public?,” Freeman asked.

“We did reach out to the schools. Both All Saints and Hoboken Charter have mission statements … that take social justice head-on. It underpins the legalization of cannabis in a prominent way,” Thompson replied.

He added the schools had not heard complaints from parents about them.

“If we’re concerned about exposing kids to vices, we should look at the liquor store across the street,” Thompson said.

“You don’t have a backer like some of the larger dispensaries. Are there any concerns about the business not succeeding?,” Mondello questioned.

“We are confident once we open, we’ll earn revenue,” Thompson replied confidently.

Several residents voiced their opinions on the project, with most being in favor.

“I am beyond impressed by the thoroughness. I intend to walk the 15 minutes or so to you. I love the commitment you’ve put to out the community,” Leah Shoot said.

“I’ve actually known the majority owner for more than 20 years. I wanted to speak on their character,” James Mcilvaine said.

Russo appeared to be convinced this time around, though he had one caveat.

“The social side of the legalization of marijuana is imperative. Instead of my typical ask of funding a police officer, I will ask for help with our affordable housing trust fund,” he said.

He also wanted them to run an expungement clinic and Thompson said he was open to doing so.

“It’s important we support micro-businesses. Despite my concerns, I wish you the best of luck,” Freeman said.

“I’m really excited actually to have you in the neighborhood,” Russo said when voting yes.

Pellegrini again said he thought there would be too many dispensaries in the neighborhood before voting no, with the measure passing 2-1.