The Jersey City Council passed a very slightly amended inclusionary zoning ordinance at another marathon meeting last night after four hours of public comment where only one resident spoke in favor of the measure. 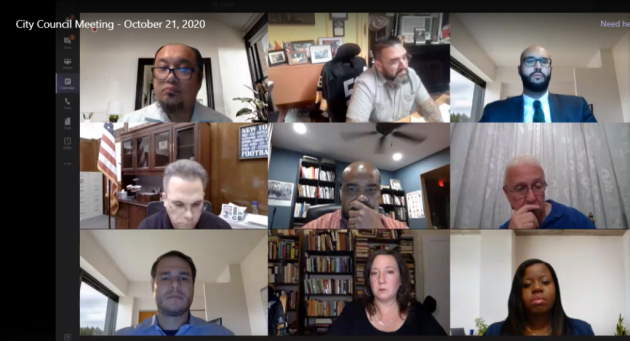 “The ordinance as proposed would be one of the weakest, if not the weakest housing ordinances in New Jersey,” said Fair Share Housing Center attorney Bassam Gergi.

The Fair Share Housing Center came out firmly against the ordinance prior to yesterday’s meeting, exclaiming that it was “riddled with developer-friendly loopholes.”

“This is a pay-to-play disaster waiting to happen,” said Eleana Little, of NJ-08 for Progress and the Hudson County Progressive Alliance, regarding the council’s ability to waive the affordable housing requirements under the buyout provision.

That portion of the ordinance would allow developers to pay the city between $25,000 and $100,000 per unit – with a two percent annual increase – instead of building affordable housing. Those funds would then be allocated to the city’s affordable trust fund.

“You could not have come up with a weaker resolution,” expressed resident Dana Patton.

Patton, along with many others, cited that 30 percent of Jersey City residents have difficulty paying rent.

Ward D council challenger Patrick Ambrossi noted that he’s see the community grow and change over the years and many have left the city due to the increased costs of living.

He, along with many others, voiced support for Lavarro’s amendments.

“I should be spending my night fighting against a racist president but instead I have to spend my time fighting my own mayor’s racist policies,” stated Rebecca Missel, also of NJ-08 for Progress.

Additionally, Scott Welfel called for the “loophole” where a parking deck, police station, and other givebacks could be built in lieu of affordable housing to be removed.

“I understand the impetus behind the parking deck idea. Obviously, parking is a huge issue. But it shouldn’t come at the expense of affordable housing,” he said.

“This ordinance does nothing for low-income households at risk of being priced out,” added Jenny Tang.

She further stated that developers could build substandard housing units elsewhere under the provision that affordable housing could be built offsite, which would worsen segregation issues.

Ryan Moser, of the Hudson County Progressive Alliance, thanked Lavarro and Solomon for advocating for Jersey City residents. He said his pleas to the others would likely fall on deaf ears.

“I genuinely hope you can prove me wrong tonight,” Moser said.

“How could any of you vote for this in good conscience?,” questioned Amy Torres of the Hudson County Progressive Alliance and Solidarity Jersey City.

Torres also said the council majority was being motivated to pass the ordinance in its current form so that developers would continue to back their re-election bids next year.

“It’s a shame you’re squandering this opportunity to guarantee affordable housing for our kids,” said Elayna Thompson. “We, the people, will look forward to holding you accountable next year at election time.”

Rob Menendez Jr., the son of U.S. Senator Bob Menendez (D-NJ) and a potential mayoral candidate, joined the chorus asking for the council to vote down the IZO.

“It’s simply not the ordinance the city needs … Please don’t resign yourself to pass the ordinance because this is what the mayor wants.”

As he announced just before Monday’s caucus, Councilman-at-Large Rolando Lavarro sought to strengthen the ordinance by adding amendment, such as tripling the amount of affordable housing mandated downtown and eliminator any buyout provisions.

However, ultimately only his “rounding amendment” to ensure developers pay for every every penny: for example paying for the “0.4” if a project is slated for 25.4 units, instead of just 25. That amendment passed unanimously (9-0).

Meanwhile, the vote to eliminate the buyout provision failed 7-2, with only Lavarro and Ward E Councilman James Solomon voting in favor.

From there, an amendment to have at least 15 percent affordable housing in new developments in wealthy neighborhoods to 5 percent elsewhere was voted down 6-3 with Lavarro, Solomon, and Ward D Councilman Yousef Saleh casting yes votes.

Saleh said both developers and many residents are against the affordable housing ordinance.

“I agree it’s wholly inadequate,” Saleh said, noting that the status quo is no better.

The remaining council members said it might impede development in their wards, prompting Lavarro to state that the tier maps were a result of a compromise.

Ward F Councilman Jermaine Robinson said before voting against the amendment to stop the construction of community benefits instead of affordable housing that “limiting what we can do will hurt the south side of the city.”

He argued his ward desperately needs infrastructure investment, and this was one way to accomplish that.

Lavarro said there are other ways for the city to find the money for improvements. That amendment to eliminate allowing community givebacks to replace affordable housing. also failed 7-2.

Ward A Councilwoman Denise Ridley said flexibility was needed to encourage development in Ward A, which is already affordable.

An amendment to ensure units are kept affordable longer than initially prescribed, specifically for 45 years instead of 30, failed 6-3, with Saleh again voting with Solomon and Lavarro.

The remaining amendments were bundled together and failed 6-3, with the aforementioned council members again voting in the affirmative.

“I understand what the councilman is trying to do here,” said Ward A Councilwoman Denise Ridley before voting yes on the slightly altered IZO. “But I’m also concerned that developers will come into Ward A and try to build more high rise developments.”

“I get calls routinely that people are desperate for affordable housing … They’re the worst calls,” Solomon stated, noting that he felt the ordinance was still too weak to vote in favor of.

“An ordinance with this many loopholes, you’re better off not having an ordinance at all,” Lavarro said pointedly, arguing it would change very little before voting against it.

Finally, after about five-and-a-half hours, the council approved the IZO, with the rounded amendment, by a tally of 7-2. Solomon and Lavarro voted no.

Lavarro said despite not getting the result he had hope for, he still felt resolved and eager to fight after receiving community support.

“This fight isn’t over. In fact, it has just begun,” the councilman stated.

” … We recognize that an illegal and deeply flawed #fauxIZO is not the answer to Jersey City’s rapid gentrification. We will work with them to push for comprehensive legislation that will ensure that people of all races and income levels are able to call this city home.”

Prosecutor Suarez stands by her office’s decision not to charge Alvarez...