Two people have been charged with one count each of animal cruelty in Jersey City after the mayor’s quality of life task force investigated numerous complaints of a dog being left outside during the recent heat wave.

Yesterday, members of the quality of life task force responded to 16 Fulton Ave. after numerous complaints of a dog being left on the porch of a vacant home over the weekend where temperatures were near 100 degrees, according to City spokeswoman Kimberly Wallace-Scalcione.

A caretaker for the pet responded to the scene on behalf of the vacant propertyâ€™s out-of-state owner. The canine, an approximately seven-year-old mixed breed named Maxina,Â  was surrendered to Liberty Humane Society, authorities said.

In consultation with the Hudson County Assistant Prosecutor for animal cruelty, the property owner, Munther Asad of New York, NY, and the identified caretaker Joseph Maninno of Bayonne, were charged each with one count of animal cruelty.

Additionally, the divisions of Housing Code, Sanitation, and Environmental Health were also present and wrote summonses for various code violation related to the condition of the vacant property.

LHS Executive Director Irene Borngraeber added that the organization is currently caring for Maxima, who is already up for adoption.

“Maxina was surrendered to Liberty Humane Society by her owner. She is highly dog reactive and exhibits inconsistent behavior with people,” she said in an email.

“We are actively looking for an adoption or rescue placement capable of managing her behavior challenges so she can live a full life.” 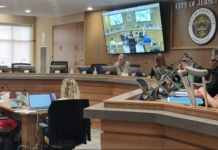