With Jersey City Board of Education Trustee Amy DeGise officially ascending to the helm of the Hudson County Democratic Organization, what are the implications for June 2019?Â 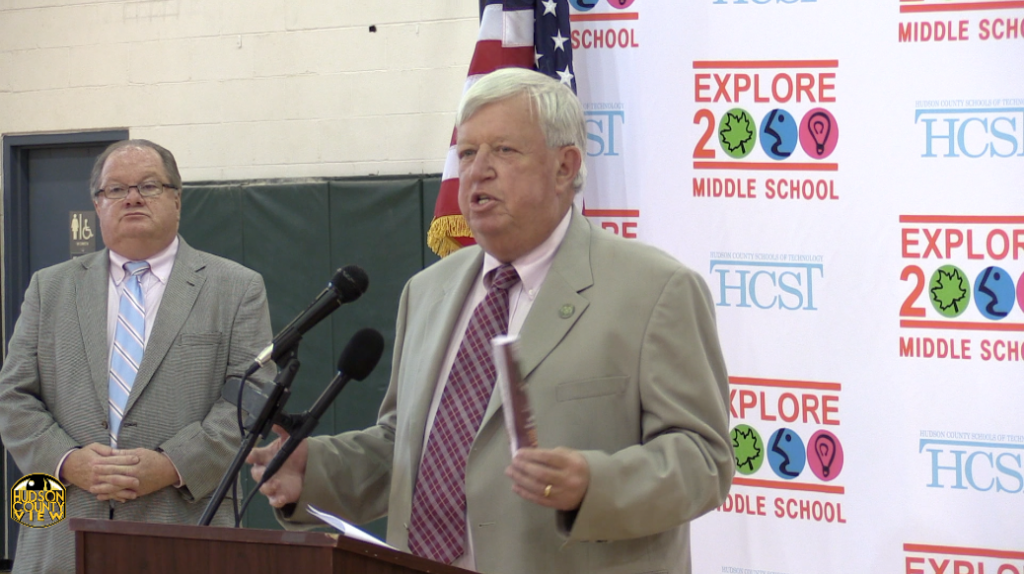 Not much needs to be said here at this point: state Senator (D-33)/Union City Mayor Brian Stack has gone on the record saying he will no longer back an effort to oust Tom DeGise after his daughter Amy defeated him for HCDO chair.

While he could change his mind, and Jersey City Mayor Steven Fulop could also field a ticket by himself, those options seem extremely unlikely. Right now, no reason to believe the elder DeGise will be challenged in next year’s June primary.

As of today, this is probably the most complicated legislative district in Hudson County.

Angela McKnight easily defeated Jersey City teacher Kristen Zadroga Hart, a close friend of Amy DeGise, in 2017. If it were solely up to those two, the tables would be turned and McKnight would be off the line next year.

However, before the younger DeGise got the nod to run for HCDO chair, Hart appeared to be the candidate – that is until Bayonne Mayor Jimmy Davis put his foot down and said he wouldn’t support someone who told him to resign due to sexting allegations.

The Bayonne Democratic Committee came out huge for DeGise on Tuesday, delivering over 90 votes, and the new executive director of the HCDO is an aide to Assemblyman Nick Chiaravalloti (D-31) – McKnight’s running mate and a close ally of Davis.

McKnight also has a cozy relationship with Fulop, so it’s possible Davis can be convinced to throw her off the line, but thus far she has been a staunch a supporter of his. Long story short, this one is too messy to expect to figure out any time soon.

On the flip side, Chiaravalloti could face a challenge from his home city, despite Davis winning with ease last month: former HCDO Executive Director John Minella has had his eye on the Assembly seat for a long time and could be rewarded by Fulop for going against the grain and trying to help Stack.

While he would never get the line after supporting Stack over DeGise, Jersey City Board of Education President Sudhan Thomas, who actually lives outside Stack’s district, is eager to climb the political ladder. With the proper funding, he would probably enter the fray.

This is far less complicated than LD-31, though there is still a hint of uncertainty.

Angelica Jimenez told us on our live show three weeks ago that she would prefer to seek another term in the Assembly, though didn’t completely rule out heading a ticket against West New York Mayor Felix Roque in May 2019.

The reason why the door hasn’t been closed yet is fairly straightforward: U.S. Rep. Albio Sires (D-8) would like Commissioner Gabriel Rodriguez to be Roque’s opponent, while state Senator (D-32)/North Bergen Mayor Nick Sacco would prefer Commissioner Cosmo Cirillo.

If neither side wants to give an inch, Jimenez is probably the only logical compromise so that there isn’t a four-way dance (Anthony DeFino, Jr. already said he’s running), which would muddy the waters enough to give Roque a reasonable chance to sneak back in.

As for Pedro Mejia, given that he was just appointed to succeed former Assembly Speaker Vincent Prieto earlier this year and cruised to victory in his June 5th special election, his seat seems pretty safe.

Raj Mukherji was first elected in 2013, while Chaparro joined him in 2015. Former Stack running mates Sean Connors and Ruben Ramos, the latter the current Hoboken council president, worked hard to get DeGise votes on their respective home turfs.

Ramos seem be enjoying himself antagonizing Mayor Ravi Bhalla with the rest of the council majority, so odds are he’s happy where he is.

Meanwhile, Stack would certainly run a scorched earth campaign against Connors, even if it was off the line, since there a lot of bad blood remains on both sides. Even with party support, Connors would have a tough time here.

Speaking of Bhalla, rumors persist that he has inquired about the possibility of joining Stack in the legislature. In the state senator’s eyes, his stock has never been higher, as he feels he was the only mayor who lived up to his word in his battle against DeGise.

If this speculation was at all based in reality, Bhalla would need to flex his political muscle one more time this November by making sure runoff elections stay out of Hoboken.

While most people have written of Chaparro as the odd woman out in this scenario, this may be the one time Hoboken could get away with having two Assembly candidates, given that Stack could potentially force Fulop out of the equation if he was so inclined.

Stack and Fulop aren’t going to work together again any time soon, but that doesn’t make this scenario particularly plausible. Look at it this way: instead of a zero percent possibility, consider it maybe a five to 10 percent chance.

Along with Ramos, 1st Ward Councilman Mike DeFusco, Bhalla’s chief political nemesis, will inevitably run a campaign to bring runoffs back. If that effort is successful, there is an outside chance he may want to be considered for the Assembly.

Don’t count on it though, because if the chips fall that way, DeFusco will probably be giddy over the potential opportunity to rematch Bhalla one-on-one in December 2021.

Granted, the opposite also needs to be considered: if Bhalla keeps Hoboken elections the way they are, his political capital will be very high and he will certainly be feeling good about his odds for a second term.