For three days a week during certain hours, homeless individuals in Journal Square can get a hot shower, courtesy of a mobile effort being run by the City of Jersey City. 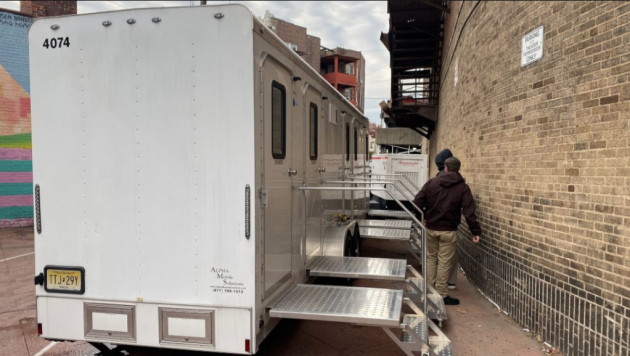 The temporary mobile showers, which started servicing the homeless community near the Loew’s Theatre last week, is part of a broad initiative by the city to build relationships with its most vulnerable residents by steering them towards the services they need.

With homelessness on the rise in Hudson County, some experts say the showers are merely a band-aid on the issue and ultimately does not address the direct cause that experts say forces people on to the streets: a lack of affordable housing in the area.

Mobile showers have been used in many communities across the country to assist homeless people.

In Jersey City, the initiative arose out of community meetings with residents in Journal Square, who say there has been a concentrated and visible homeless population in the area for years.

The showers are not a permanent fixture, and it is uncertain if the showers will be used in other areas of the city, where homelessness is “clearly an issue,” Mayor Steven Fulop told HCV.

“Some of these people need very specific help. We’ve partnered with addiction-focused nonprofits, job training nonprofits, second chance programs, and with professionals that focus on mental health, so we’re using these showers as a conduit to build those conversations and start a dialogue to steer them towards that stuff. But it’s a challenge.”

Homelessness has seen a rise in urban areas across the country, and Hudson County saw its homeless population increase by 3 percent from last year, according to a study conducted in January.

That study, organized by Monarch Housing Associates, showed there were 890 homeless people in Hudson County â€” with 226 persons identified as chronically homeless. Jersey City has a majority of the population with 421 individuals without a permanent home.

Experts say this increase is inextricably tied to the lack of affordable housing, and as luxury development in the county continues to increase, as will the homeless population.

“Showers are effective in that they’re helping people get in a good place to be clean enough to get a job, or to go about their day and feel in a good space. But they’re not going to help people get housing,” said Emmy Tiderington, a professor in the School of Social Work and Associate Faculty at the Institute for Health, Health Care Policy, and Aging Research at Rutgers.

The city has committed to helping the homeless population in other ways as well.

A new shelter is expected to break ground early next year in Downtown Jersey City on the site of the old St. Lucy’s shelter — as part of a deal between city government, the Archdiocese of Newark and real estate developers.

This shelter would have rooms for 150 homeless people, space for 14 people living with HIV/AIDS and six units of permanent housing.

But many consider the city’s efforts moot unless the issue of affordable housing and income inequality is addressed.

She pointed to Jersey City’s efforts to enforce rent control more aggressively, and said officials could bolster those efforts by building a right-to-counsel into its new ordinance – which would give people in eviction court the right to legal counsel – as well as adopting inclusionary zoning to mandate affordable housing in all luxury development.

However, there are still concerns that the city is not moving quickly enough.

“Just like in New York City, the increase in homelessness skyrocketed as development happened in Brooklyn and Manhattan; the same thing is happening here,” she said.

“I think we’ve been in a sweet spot where development is happening but you haven’t as much visible homelessness until the last year or so. Without building more affordable housing and keeping pace with the amount of luxury development… we’re going to see a skyrocketing rate of homelessness.”

Officials in City Hall say a new rent control ordinance could be drafted by the end of the month. Additionally, city workers with the department of health and human services will keep count of the number of people using the showers to measure the impact.

“I think at the end of the day it is a housing issue coupled with social services,” Fulop added, “and we are investing in social services and we are building more housing, but it is a complicated challenge.”

“It’s a national epidemic as costs have risen and people are working more jobs and have limited resources.”