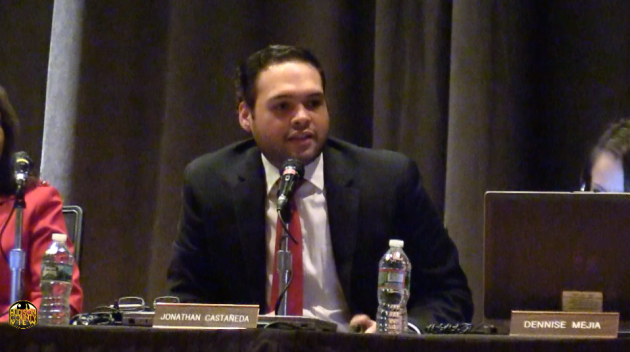 “I was asked by Mayor Roque to serve as his chief of staff, Being a lifelong resident of West New York, I am blessed and thankful to the mayor for the opportunity to serve my community,” Castaneda said in a text message.

“I’m further thankful to all who have trusted me over the years with the knowledge, skills, wisdom and values to embark on this role – from my teachers in the West New York School District, to my professors at the Bloustein School and Seton Hall,” also offering thanks to the Eagleton and Congressional Hispanic Caucus Institutes.

Castaneda, 26, has previously worked for the offices of U.S. Rep. Albio Sires (D-8) and U.S. Senator Bob Menendez (D-NJ) and was elected to his first term on the West New York BOE last year.

He also helped the latest incarnation of the Children First board of education team campaign in the November 8 election, with Board President Adam Parkinson and Trustee David Morel being re-elected to three-year terms.

In a statement, Roque said Castaneda was the perfect fit for the job.

“Jonathan grew up in West New York, he knows what needs to get done and has a knack for getting it done. His work ethic and commitment to public service over the past two year got him noticed. His is an excellent choice to represent me and help me and my commissioners move our town forward during my administration,” he said.

“His education background, which includes a Masters of City and Regional Planning from the Bloustein School of Planning and Public Policy and his Master of Public Administration from Set Hall University indicate a commitment to academic excellence,” he added, also speaking highly of his previous work experience.

Castaneda, who will earn about $50,000 a year at the post, replaces Luis Baez, who will continue to work for the town as the constituent services director and events coordinator.