The West New York Board of Education reappointed two trustees and added one new member at last night’s meeting, with Adam Parkinson again named president and Jonathan Castaneda taking over as vice president. 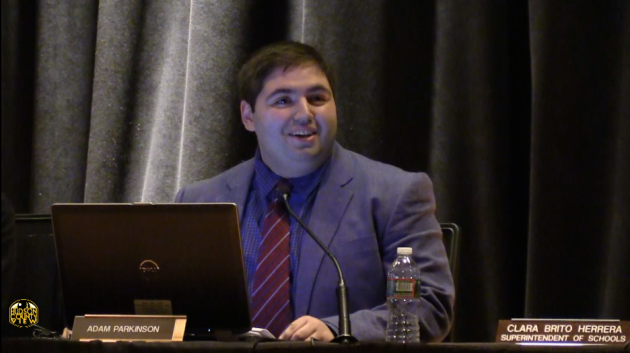 Parkinson, who will lead the board for the ninth year in a row, was first reappointed along with Trustee Marielka Diaz. They will be joined my first time board member Aylen Jover.

“I’m very excited that the board of education has trusted me once again to serve as president. Every time I’ve been nominated it’s been an absolute pleasure serving with my colleagues,” Parkinson told HCV.

He also said Diaz and Jover “two quality candidates who will do a great job,” with the latter being a 2012 graduate of Memorial High School who was born and raised in West New York.

Furthermore, he said that Castaneda was a good fit as VP since he’s the second most senior member of the board who has chaired the finance committee for years and he’s yet another product of the West New York Public Schools.

The board again had to act to fill vacancies created in the new year after their school board elections were moved from November to April, beginning in 2021. David Morel, the outgoing board vice president, did not seek a four-month interim spot on the board.

With Sandra Pfeil added to the board last month after the New Jersey School Ethics Commission removed Trustee Ismail Dalia for not filing a financial disclosure form, four seats will be up for grabs on Election Day, which is April 25th.

With the May 9th municipal elections just a couple weeks later, more candidates may seek a seat on the volunteer board than usual.

Another former mayor, Felix Roque, is widely expected to throw his hat in the ring at an event at Las Palmas this evening.