U.S. Senator Bob Menendez (D-NJ) joined with 9/11 widows, children, and other family members of terror attack victims who applauded the passage of a new law he sponsored that will provide them financial incentives for their hardships. 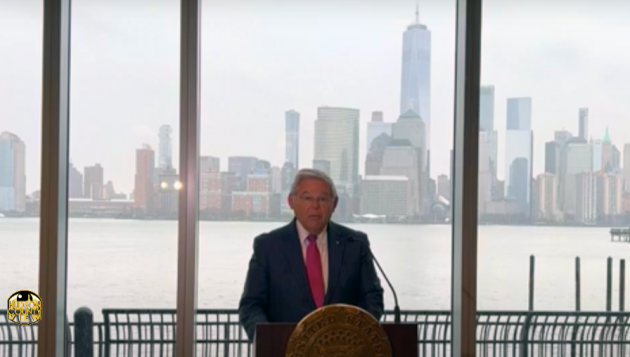 The legislation, which passed the Senate in December as part of their 2023 federal budget, will provide relief for 9/11 families and other U.S. victims of state-sponsored terrorism who are eligible for the U.S. Victims of State-Sponsored Terrorism Fund (USVSST Fund).

The lbill catches up on payments for thousands of 9/11 victims, spouses, and children who were excluded from the USVSST Fund when it was first established in 2015.

“It’s fitting we do this here across the river from the Freedom Tower in Lower Manhattan as we remember nearly 3,000 men and women and 750 New Jerseyans who were senselessly murdered on Sept 11th,” Menendez said at the podium in the lobby of his Jersey City office.

“President Biden signed legislation that included my Fairness for 9/11 Families Act. These families were prevented from joining the fund unless they gave up their involvement in ongoing litigation. It delivers long overdue relief to 9/11 families who were previously unfairly excluded from the U.S. Victims of State-Sponsored Terrorism Act.”

New Jersey’s senior senator continued that the fund now has $6 billion, $4 billion of which has been earmarked for these families, which also includes the Iran hostages embassy, bombing victims, and the families of the bombing victims of the USS Cole attacks.

“I do consider 9/11 state-sponsored terror. I believe that those individuals could not have acted without the assistance of a larger entity. We have strong, strong reasons to believe the government of Saudi Arabia was behind these individuals,” Menendez asserted.

“It’s critical for American families to know the truth for the families of the victims to be able to successfully litigate in court beyond the victims’ fund.

American Gold Star Mothers National Monument Foundation Chair Judith Young was one of several who followed Menendez’s remarks at the podium, thanking him for his efforts to help them.

“Senator Menendez has been with us … since we first said ‘we want to sue a country.’ They said … ‘you can’t do that.’ We said ‘sure we can.’ We even had the Supreme Court rule in our favor,” she recalled.

“Our aim was to make Iran pay, and we did, and we did take them to court thanks to Senator Menendez.”

Young also noted the families of the victims of Pan Am Flight 103, blown up over Lockerbie, Scotland, sued Libya and won.

“I know a day doesn’t go by when you don’t think of the loss. I know time may have passed, and life might go on, but the legacy of their lives remains,” Menendez said.

She explained the act compels American “intelligence agencies to comply with court-ordered subpoenas regarding their investigations into the Kingdom of Saudi Arabia and its government, agents, banks, government-run charities, and wealthy individuals involvement in murdering nearly 3,000 Americans.”

Strada said it commands the U.S. Department of Justice, the Treasury Department, the State Department, the CIA, and the FBI to conduct a full declassification review of all US intelligence investigative reports and declassify reports to the greatest extent possible.

“Thousands of pages concerning the Saudis have been de-classified,” she explained.

“I will just refer you to my original statement. I know there’s a review going on. It will result in nothing. That’s all I can say at this moment,” Menendez said when asked about an ongoing U.S. Department of Justice investigation.

“I would urge you to look at my history with Egypt in denying aid and a weapons sale,” he added.