The Township of North Bergen held their annual Veterans Day ceremony at their recreation center this morning, which had several vets and their families in attendance. 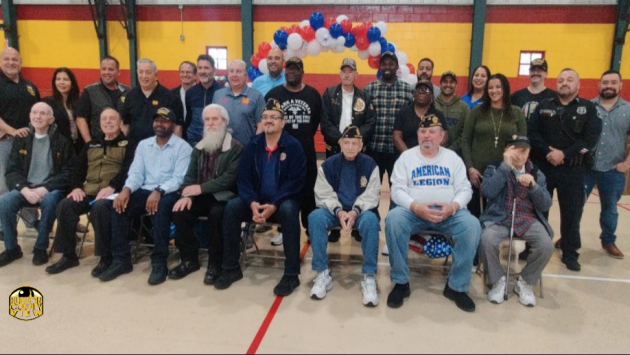 “We have this ceremony to honor you who served this country and who have given us our freedoms. It wasn’t the media, it wasn’t all these other factions in our country who gave us our freedoms, but it was the veterans. Veterans were on the front lines,” said state Senator (D-32)/Mayor Nick Sacco.

“My father served in World War II, and he served on the island of Saipan. My uncle served in Europe, and he’s probably looked down now today, proud I think of what this country has accomplished. God bless each and every one of you.

“It’s because of the heroes like them that I didn’t have to go to World War III. And that we all pray and hope that our children will never see a World War III. In my house, I proudly display a purple heart that was given to my uncle over in Germany.”

He explained it is a treasured heirloom that it is passed down to the youngest in the family.

“In the 1950s, when I was in high school, it was almost expected that young men would, go in the service … In my time, it was expected but for me, it was an honor. It made a better person out of me. I understand the benefits of the people who put their time in,” he stated.

Gargiulo also noted that he served in the army during the “Cuban Missile Crisis, which was pretty interesting, pretty scary. God bless you, and God bless your families.”

“Veterans Day was created here at the 11th hour of the 11th day of the 11 month. That was the ordinal armistice,” noted Revenue and Finance Commissioner Julio Marenco, a Navy veteran.

He also noted they also observe Flag Day to honor veterans, which Sacco is a fan of.

“We thank you for your service always. North Bergen has always honors the veterans in the community, and we appreciate what you have done for this country and its freedoms,” Marenco concluded.