The Hoboken Planning Board heard four hours of testimony from Story Dispensary’s traffic engineer at the third marathon meeting for the potential cannabis dispensary. 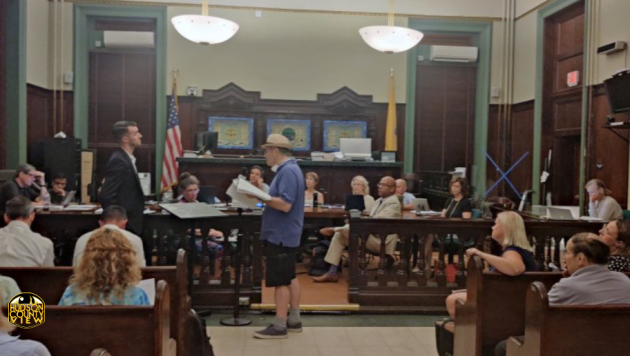 The project, whose neighbors have been outspoken against it and has a pending court case, was cleared by the Hoboken Cannabis Review Board in February and the Hudson County Planning Board in May.

“We tried to look at the anticipated [project] from the existing proposed land use,” Traffic Engineer William Masol said.

He explained they turned to the Institute of Transportation Engineering manual compliance data on various land uses, creating average trip generation rates, which is the standard practice to use.

“We wanted to show an apples-to-apples comparison. Generally, traffic, especially on the weekends, is pretty consistent throughout the day,” Masol noted.

He also explained that the Hudson County Planning Board wanted them to look at the newest edition that came out in September 2021 versus the edition they used in 2017.

Furthermore, Masol asserted that the trip difference between a high turnover restaurant and a cannabis dispensary was insignificant.

“I can definitely understand the concern,” he said about the idea of too much traffic there. “The real increase for traffic you’re seeing is for the Saturday peak hour.”

He argued the rate of a restaurant wasn’t very different from the traffic a dispensary would create, since most of their patrons would be walking from the ferry, many locals would also walk, and that the number of people traveling from New York were not considered.

“That is a federal crime, so no, I did not consider that,” Masol stated.

“Were you surprised at the changes in the data from the editions?,” Planning Board Member Joan Allman asked.

“As the novelty wears off … the number of people going to that business is going to drop off,” Masol replied.

“Is that intersection said to be dangerous?” attorney Lauren Tardanico, counsel for Story, asked.

Commissioner Jim Doyle, also a councilman-at-large, asked why they compared the dispensary to a restaurant.

“Someone could open a restaurant in that place tomorrow because it’s an approved prior use,” Masol said. The site, 51 14th St., is the home of the former Hudson Tavern.

“Ok. Most people have a good understand of what the traffic has been like for the last five years,” Doyle replied.

The attorney for the condo association who filed the lawsuit, Martin Cabalar, sought to make the point that former Hudson Tavern was not a high turnover restaurant.

“Your opinion is that the proposed use has minor traffic changes in nature?,” he asked.

To that end, Cabalar noted they did not perform an actual analysis of traffic in the area and that by New Jersey Department of Transportation standards, the traffic would be high.

Tardanico asked Masol why they chose the definition of a high turnover restaurant.

“It was our understanding it was a bar/restaurant. We looked at the proven land use more than anything,” Masol answered.

Before asking a question, 2nd Ward Councilwoman Tiffanie Fisher noted their concerns over traffic and the burden it could put on the neighborhood.

“Have you done a traffic study before in Hudson County before?” she asked.

Masol said he conducted one in Jersey City in 2017 or so.

“Did you come to Hoboken to do this application?,” Fisher asked.

Masol said he worked on the nearby 14th Street Viaduct for Hudson County and was thus familiar with the area.

“You’re doing work for the county and representing this client before the county planning board?,” Fisher asked.

“That’s not appropriate,” Fisher quipped, leading to an objection from Tardanico, who said that has no bearing on the case.

“Some of the busiest times in the area relate to the social and tourist element of this area … The numbers you presented are not apples to apples,” Fisher continued.

She asked if he ever used the ITE book versus local data. He noted they rely on ITE for comparisons, as well as if they looked into seasonal variations.

“Typically, we restrict that to places like the Jersey Shore,” Masol noted.

Fisher also said New Yorkers could buy and consume cannabis in Hoboken before heading to the bars.

“Do most people go to cannabis dispensaries by themselves, or do they bring a bunch of people?m,” Robert Verthelyi asked.

“I have no data on that,” Masol replied.

He noted the ITE standards just have a standard cannabis dispensary and no differentiations.

“We didn’t consider it. We hoped there would be no increase in car accidents,” Masol answered.

“I live there. I see the traffic every single day. Are you aware of all the students crossing the street every day?,” Maini questioned.

Maini also said that neighborhood is considered a high crash area, to which Masol responded he would take her word for it and that traffic would likely increase to some extent.

The meeting concluded at around 11 p.m., with their next session on Story scheduled for September 19th.