The Shell Gas station, located at Route 3 East and Flanagan Way in Secaucus, was fined and banned from selling premium gas after tests revealed that their premium gas had octane levels comparable to regular and mid-grade gasoline, Hudson County Sheriff Frank Schillari said.

â€œFuel station owners that are trying to pass off regular gasoline as higher octane fuel to make larger profit from unknowing drivers will be caught in Hudson County,â€ Schillari said in a statement.

â€œOur Weights and Measures Division is here to protect the consumer. Those who try to cheat will get caught and will be fined substantially.â€

He added that along with the $18,000 fine, the owner of the gas station also has a mandated court appearance.

The gasoline at the gas station was tested yesterday by the Division of Weights & Measures and sent out to an independent lab for additional tests, which confirmed the low level of octane in the stationâ€™s premium gas, Schillari further explained. Police: 2 men arrested for stealing over $200k in laptops & perfume as part of Secaucus inside job 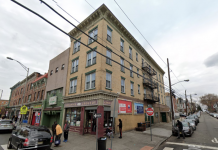