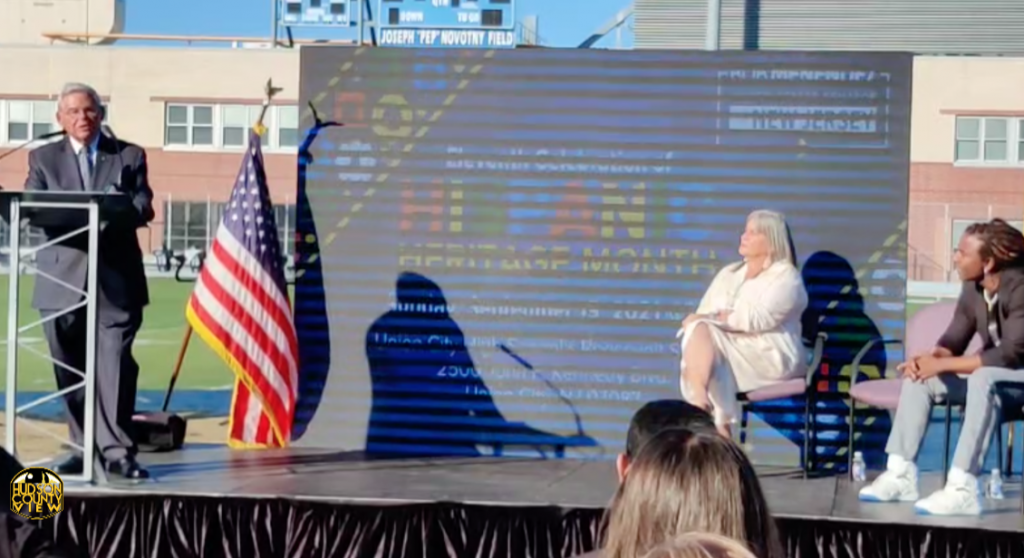 He noted they held it on the football field, versus the auditorium where it was previously held, as a precaution due to the ongoung COVID-19 pandemic.

Early on, the Garden State’s senior senator spoke in favor of the demonstrations protesting the Communist regime in Cuba.

“I grew up the son of refugees poor in a tenement in Union City, the first to go to college. If you told me then that I could be one of 100 United States senators in a country of 330 million people, I would have said that’s not possible. But it is the promise of America fulfilled,” Menendez said.

“As a son of Cuban refugees, I can’t tell you how much it means to see the people of Cuba rising up and uniting against repression,” he said.

Yotuel Romero, who launched the song “Patria y Vida” – which means country and life abd Menendez said was the unofficial anthem of the protests – was honored.

“You must understand … the courage that it takes to speak out against a dictatorship. You end up in jail, you end up tortured, or you end up disappeared. It takes a great deal of courage to speak up,” Menendez said.

“There is no freedom of expression in Cuba. Speaking out can land you in jail. And indeed every year, the Cuban regime intimidates, attacks and imprisons hundreds of artists, journalists, and everyday citizens who dare to express a contrary opinion.”

“There is no internet freedom in Cuba. The regime censors content, monitors traffic….and they shut down the internet to silence them,” he added.

He noted in Spanish that Union City is the second-largest population center of Cuban Americans in the United States after Miami, Florida, calling it “Havana on the Hudson.”

Menendez continued that in the new U.S. Census that there are “62 million Latinos across the United States who share our proud history, vibrant culture, and enterprising spirit and enduring belief in the American dream.”

“So if we were our own country, we would be the 8th largest economy in the world,” he said.

Menendez also noted Hispanic representation in culture and politics has increased over the years.

“In my 30 years in Congress, I have never seen a cabinet that has this many Latinos and not just the number of Latinos, but the positions that they are in, making major decisions about our nation,” he noted regarding the administration of President Joe Biden (D).

“There are also six Latino U.S. Senators, which would have been unthinkable to me when I was alone for a very long period of time,” he added.

Menendez noted Hispanics have been on the front line of the pandemic in many essential positions in health, warehouses, and stores.

“If there was ever a time that undocumented immigrants proved how just essential they are to our country, it was during this pandemic. And if it was ever a time for Congress to thank them for their sacrifices and pass the goal of comprehensive immigration reform, it is now,” he said.

“More than five million undocumented performed essential work during this crisis including over 900,000, DREAMers. They all deserve the opportunity to pursue a path to citizenship in the country they love.”

He explained he introduced a citizenship bill that while it has been met with Republican opposition, he will nonetheless continue to push the bill in Congress.