State Senator (D-32)/North Bergen Mayor Nick Sacco said that “horrendously bad advice” to his Union City counterpart Brian Stack is what led to the civil war among Hudson County Democrats during a short interview at a fundraiser last night.

“Horrendously bad advice to Brian Stack: whoever gave it to him, gave him the worst advice,” Sacco exclaimed outside The Waterside Restaurant when asked about any theories regarding the latest snafu among Hudson Dems.

Stack, the state Senator of the 33rd Legislative District and the Union City Mayor, along with Jersey City Mayor Steven Fulop, announced out of the blue in March that they would not be supporting Hudson County Executive Tom DeGise for re-election.

In response, Sacco and U.S. Rep. Albio Sires (D-8) began forming a faction that is in support of another term for DeGise.

Up to that point, Stack appeared to coasting his way onto becoming the next Hudson County Democratic Organization chair, but is instead now facing a spirited challenge from Jersey City Board of Education Trustee Amy DeGise – Tom’s daughter.

“The one thing that I’m thinking about is that none of this had to happen,” Sacco exclaimed before going on to say that he liked Amy DeGise’s chances.

Back in North Hudson, West New York Mayor Felix Roque raised some eyebrows when he endorsed Larry Wainstein to be next mayor of North Bergen about two weeks ago.

“I think the chance[s] of Felix Roque being the mayor next year are very, very slim. He’s taken on everybody around him: we have no idea why. He was running unopposed. He had a ticket, he was the leader of the town,” Sacco explained.

“And he does this, he turned on the county executive, loses control of West New York: when you [can’t] count to three in a commissioner form of government, you no longer have control of the government.”

The often politically unpredictable Roque has also now taken aim at Sires, telling InsiderNJ yesterday that “he needs to retire in peace. I heard he’s a great golfer.”

Sacco said he expects Sires, a former West New York mayor, to use that quote as fuel heading into a pivotal Democratic committee race on Tuesday.

“I can’t imagine how he feels. I made sure the article was sent to him so he could read it. I’m sure his back is up now more than it was before.”

A spokesman for Stack did not return an email seeking comment.

Editor’s Note: This story has been updated with a comment from the Roque campaign. 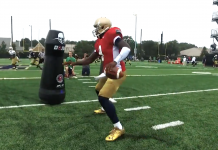 The Bronx Wanderers host concert on Boulevard East in Guttenberg