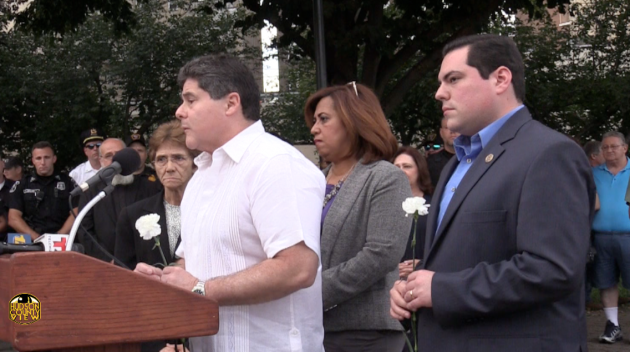 “To the extent that the Objectors rely exclusively on these affidavits in support of their objections, the petitions shall remain valid and Objectors have not come close to meeting their burden,” Town Clerk Carmela Riccie wrote in a 40-page decisionÂ issued minutes ago.

“Perhaps, if Jonathan Castaneda had appeared, his testimony may have added support to Objectors’ claims. Based on the record before me, I conclude that the Objectors have not met their burden.”

As Hudson County View first reported, Roque filed a challenge on Friday alleging that Castaneda, the head of the WNYDC who resigned as his chief of staff for a job at the Port Authority last week, “misled voters” by circulating petitions without names.

Roque’s attorney in the matter, Stephen Edelstein, further alleged that Claudia Blano, Jose Mendez, Jose Alcanatra and Albeiro Raigosa would have never signed up to run for committee under the HCDO banner.

Roque is in the midst of a political fight over who will be the Hudson County executive next year, breaking away from state Senator (D-32)/North Bergen Mayor Nick Sacco and U.S. Rep. Albio Sires (D-8) and supporting replacing DeGise.

As a result, he is now in the midst of a committee fight that will be pivotal in deciding who the next HCDO chair is: state Senator (D-33)/Union City Mayor Brian Stack, who, along with Jersey City Mayor Steven Fulop, is leading the charge to oust DeGise, is campaigning hard for the post but is expected to now face a challenger in June.

During a closed session hearing at Town Hall, only two people testified, Magda Alfonso and Milagros Rodriguez, who said they signed a committee petition circulated by Joseph Rodriguez, with his and Bonnie Rodriguez’s name on the document when they signed it.

While Edelstein called for Riccie to infer that their allegations were accurate based on Castaneda not attending, she clearly did not agree based on her final opinion.

Despite this fact, Roque said he will be appealing the decision.

“Iâ€™ve been on this road before and I know the path to victory. Jonathan didnâ€™t show up and heâ€™s the key to finding out what really happened, heâ€™s the only one who knows the story … I need to know what the truth is,” Roque said.

“I was never there actually collecting signatures. I have the utmost respect for Carmela, sheâ€™s been very transparent and full of integrity. Whatever happened, I expected, but Iâ€™m looking forward to taking it to a higher authority.â€

On the other hand, HCDO spokesman Phil Swibinski predictably relished in the victory.

“This ruling is a victory for the residents of West New York who will now have the opportunity to choose their local representatives in the voting booth, rather than having Mayor Roque attempt to dictate who will be allowed to serve the community,” he said.

“We look forward to running a strong campaign and we are confident that our slate will win the vast majority of seats in June.”

In a statement, Cirillo and fellow Commissioners Margarita Guzman and Gabriel Rodriguez, who also support the HCDO slate, echoed that sentiment.

“We are proud to support a slate of qualified, dedicated community leaders for county committee and will be working hard to ensure victory in June. Every one of our candidates has the best interests of West New York at heart and we know that they are the right choice to lead our Democratic Party forward,” the trio exclaimed.

“We are satisfied with the Town Clerk’s ruling and believe it represents the correct interpretation of the law and the right outcome to give the people of our community a voice.”