A North Bergen woman died in the hospital early this morning after being found unresponsive lying in the street after a hit-and-run on Sunday night, Hudson County Prosecutor Esther Suarez announced.

On Sunday at approximately 8:15 p.m., the North Bergen Police Department received a 911 call reporting a body lying in the roadway on 43rd Street in the area of Tonnelle Avenue, Suarez said in a statement.

Upon arrival, responding North Bergen police officers observed an unresponsive female lying in the roadway at that location.

The woman, later identified as Darlene Westbrook, 34, was treated at the scene before being transported by Emergency Medical Services to the Jersey City Medical Center where she was pronounced dead this morning at approximately 2:40 a.m., authorities said.

The cause and manner of death is pending further investigation by the Regional Medical Examiner’s Office.

The Hudson County Regional Collision Investigation Unit is actively investigating this case with assistance from the North Bergen Police Department.

Menendez blisters Trump: ‘This is the most xenophobic administration I’ve ever dealt with’ 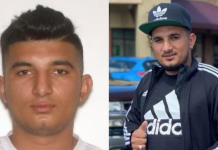