A man caught breaking into a car in Hoboken was busted with 17 bags of heroin after refusing to be placed under arrest and handcuffed, police said.

Around 2:20 p.m. yesterday, while off duty, Capt. Charles Campbell observed a male pulling the handles on several parked vehicles in the area of 5th and Grand Streets. At that point, Campbell notified headquarters and began to follow the defendant, authorities said.

He was able to observe the defendant successfully gain entry into a vehicle. Campbell observed the defendant rummage through the vehicle and later open and look inside the trunk.

At this time, back up arrived and the officers, along with Campbell, approached the defendant. The defendant, Salinger, was placed under arrest by Campbell.

As he attempted to handcuff him, Salinger placed his hands inside his pocket and ignored the officer’s commands to show them his hands. Sgt. Cesar Olavarria and Campbell were able to secure his hands after the defendant refused to allow them to handcuff him, officials said.

A search found the defendant to be in possession of 17 bags of suspected heroin, five empty bags with suspected heroin residue, along with CDS paraphernalia. He was also found to have an outstanding warrant out of the Township of Weehawken, police said.

He was processed and later received a summons for the offenses committed. He was able to post bail on the outstanding warrant and given a new court date for his appearance. 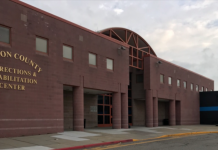 Contractor pleads guilty to rigging $70,000 in contracts from Union City...