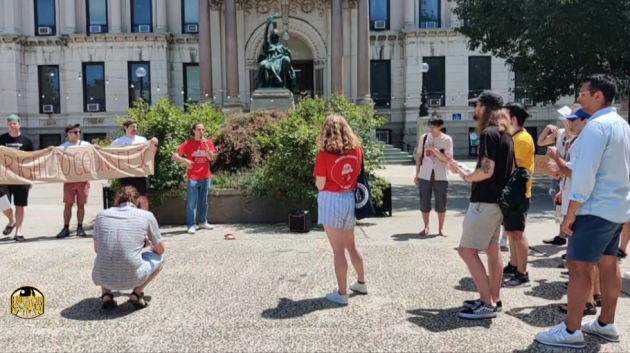 Housing is a Human Right! I believe in homes for all!,” the group chanted.

Their campaign aims to implement a citywide guarantee that renters will be provided with representation in eviction court cases.

“We are here to fight for the right to counsel in our city. We want to help ordinary people get the representation they need to fight back against developers and landlords when they are run out of their homes unfairly,” NNJ DSA organizer Allie Howard said.

“As socialists, we believe housing is a human right. This is a mostly recenter city. It’s over 70 percent renters. Buying is not really here an option for many people even if they want to.”

She also accused political leaders of pandering to developers by giving them incentives to build at the expense of renters.

“It’s a problem if we don’t pay, but not theirs. As working class residents, we bear the burden. Whether you’ve been here one year or 20 years, I guarantee you you have a story about a s***y landlord or a horrible developer coming into your neighborhood … and trying to screw with your housing, and we are tired of it,” Howard added.

Another activist, Jake Ephros, said this was a classic case of the little guy taking on corporate greed.

“We make the giant corporate developers who are responsible for this crisis pay for the right to counsel. We want to be really clear on that,” Ephros said regarding the cost of counsel for tenants.”

Joel Brooks, who lost a close race for the Ward B council seat in November, detailed once specific eviction that stuck with him.

“I witnessed an eviction in Jersey City in Greenville. A single mother with a young son. She asked that I come to housing court with her and testify that she had a job and income and a young son. She didn’t have a lawyer. She didn’t know she could get one,” Brooks recalled

He recounted the judge saying, “This is your last chance. You’re evicted. I’m going to give you a two-hour head start before the sheriff goes uh to your building.”

He further stated that such situations are “brutality” and “completely unacceptable,” which is why organizing is long overdue.

“My rent went up this year. Who else had a rent hike this year?,” Ephros asked the crowd, causing most people to raise their hands.

“Rent is heating up as it is 100 degrees outside. They’ve raised rent 100 degrees too,” he added.

Melody Magly, a housing organizer for North Jersey DSA, said that Jersey City should be looking to a recent program in Newark on how to improve this situation.

“Newark has a right to counsel for housing eviction. As I talk to my friends in Jersey City, I think it’s deeply unfair that you don’t have the same tools we have in Newark to fight against our landlords,” she explained.

““Even though Newark has the protection it has, something that I find in my tenants is fear. They rely on this. Do you think that tenant should live in fear?,” she asked the crowd.

Magly reiterated that the law implemented in Newark has proven successful.

A Bergen County activist named Gabe, who requested that his last name not be published, noted his mother had a stroke, he had to get a job, and they were stilll almost evicted.

“I had to drive my mom in her wheelchair into the courthouse and beg the judge for us not to get evicted. Luckily for me, two things happened: we had a lawyer and the judge happened to be my little league coach,” he noted.

“So many people in Jersey City are going through the same thing without a judge as a little league coach and right to counsel. We’re going to make it known that working people are going to take this bull**** anymore!”

Erica Walker, an aide to Ward F Councilman Frank “Educational” Gilmore, spoke in favor of protecting the city’s most vulnerable.

“We have to make sure that we are protecting our most vulnerable population, especially after witnessing the greatest pandemic of our time. It’s beautiful to see some action taking place. I believe we will win,” she said.

“We are going to win. This is not a battle we can afford to lose. This is a crisis that has gone on for far too long,” Howard added.

According to NNJ DSA, before New York City implemented its right-to-counsel policy, 95 percent of landlords were represented by lawyers in court, while less than one percent of tenants were.

Gabe noted that while the idea might seem far-fetched, and the campaign will be difficult, he noted that recently the first Starbucks was organized in Buffalo, NY. Now, 200 locations have voted in favor of forming unions.

One sign noted a comment from Mayor Steven Fulop early this year in response to tenants at 96 Duncan Ave. being without heat.

“You have some really terrible landlords in this city and we want laws in place to work when they try to squeeze tenants,” the sign said.