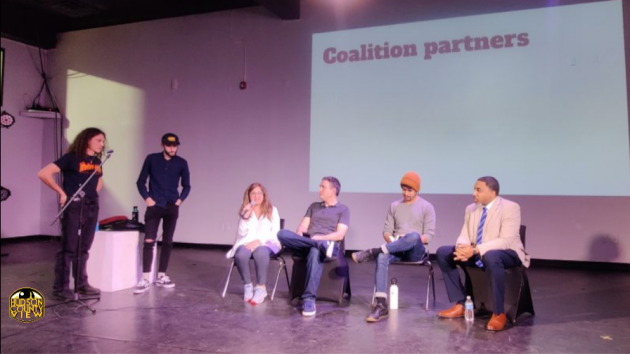 “Housing is a human right. It shouldn’t be a commodity. You should not get kicked out just because you failed to secure a lawyer in court. This is going to take money. Guess who’s going to pay? The people responsible for the housing crisis,” DSA activist Jake Ephros said.

“Jersey City has become the most expensive city in the country to rent in.”

He explained that the right to counsel means no evictions in court should take place without representation, also noting that evictions greatly spiked since the COVID-19 pandemic.

“We had water intrusion. We had failing elevators. All of our neighbors were getting these horrific rent increases,” she said, also noting that they all received a 34 percent rent increase – as she did at the November 28th city council meeting.

“There’s clearly an ordinance, 260, that establishes a four percent or CPI (Consumer Price Index), whichever is less,” she said.

Brann said her friends who were evicted are still having problems with housing.

“We always had water issues. The rents were always somewhat egregiously high. I was treated with callousness… and downright cruelty,” Portside Tower activist Jessica Rasulo said.

“There was mold in my unit. I was physically ill. I went to management… and was thoroughly gaslighted. They would begrudgingly address a little bit of mold as they gaslighted me. This seemed to be a management protocol … The elevator issues were atrocious.”

Rasulo also said that everyone received high rent increases, which led them to unite.

“This is something that we’re all feeling, we’re all seeing,” former Ward B council candidate and union organizer Joel Brooks said.

He explained a few years ago, Jersey City Together activists knocked on his door and informed him that his building was rent controlled.

“It was a shocking moment to know most of the buildings in my neighborhood were rent-controlled, and most renters don’t know their rights. I ultimately chose to take legal action against my landlord,” recalled Brooks.

He explained he filed a complaint with the city in March 2019 and received a decision in December 2019. Brooks said he had his first day in court on the matter yesterday.

“This is a process that benefits landlords and their lawyers,” he said to applause.

Rasulo encouraged people to join them at the next council meeting on January 25th.

“My council people wrote me nice emails and then nothing happened. It was happening to many, many ‘mes.’ But when all of us bounded together, and we became ‘us,’ they started listening,” she asserted.

“In New Jersey, we do have good cause eviction protection. Numbers matter. It would be beautiful to see an organization of tenants that fights harder than the landlords,” Brooks said.

Eleana Little who is running for Hudson County executive in the Democratic primary, echoed the sentiment that housing is a human right.

Little noted that her platform includes a plan to push for a countywide right-to-counsel. She also said she wants to build affordable housing on county land.

“The point about greed can’t be overstated,” Rasulo interjected.

She noted the company only had a 2.6 percent expense increase, yet still raised rent by about 30 percent.

Brooks called for people to reach out to a neighbor to educate them on housing policy.

“One of the nicest unintended results is that our community is amazing. It feels kind of storybook,” Rasulo said about becoming friends with neighbors as part of organizing.

She added that New Jersey has a right-to-counsel pilot program in three counties, but not yet in Hudson County.

Tache also explained their goal is to win the right to legal representation from the grassroots while also developing mass organization and empowering tenants to fight for justice in their own buildings.

“One of our buildings was acknowledged to be under rent control,” she said to applause.

“They don’t make it easy to get the information you need to fight. When they get a single person … they find your weakness… which is all the more reason to join together.”

“Right now, landlords have the right to counsel, and you pay for it,” Portside Towers East Tenant Association President Kevin Weller said.

He noted tenants are responsible for the legal fees of their landlords.

“Month to month is a poison pill by a landlord. They can kick out with 30 days’ notice with basically no protections.”

Former Ward B Councilman and Lincoln High School Principal Chris Gadsden commended the Portside Tenants Association for getting responses from the city council, noting how difficult it could be to secure a lasting victory.

“The status quo just goes back. The LLC transfers. The most important thing is for people to continue to organize. It’s going to take thousands of people for this to get done,” he exclaimed.

Furthermore, Ward D Councilman Yousef Saleh was among the many in attendance and indicated that he is working on a housing policy reform ordinance.