Gov. Phil Murphy (D) ordered all non-essential construction across the state to cease indefinitely, also putting restrictions on the number of workers on site for the projects that will be able to continue. 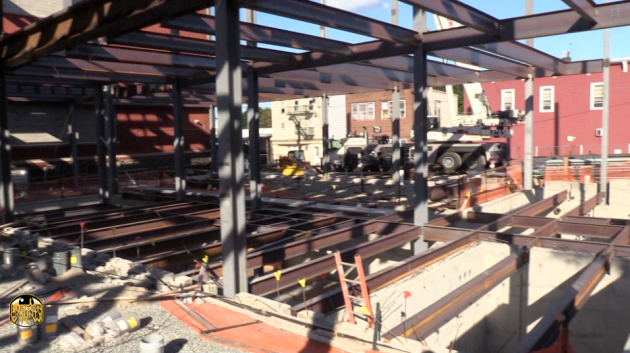 The executive order, which will go into effect Friday at 8 p.m., will stop all non-essential construction throughout the state “to further our aggressive efforts to enforce social distancing,” Murphy said during a Trenton press conference today.

Local officials had been sounding the alarm amid the COVID-19 outbreak as construction workers continued to congregate on numerous sites throughout Hudson County, including sites for luxury residential projects.

Jersey City Mayor Steven Fulop said during an impromptu Facebook live that it was “a positive thing” for the governor to stop non-essential labor, noting that many people had asked for action on the local level – which was not possible given the provisions of Murphy’s March 21st stay-at-home order.

“I applaud the governor: he’s got a lot of touch decisions to make, but at least in Downtown Jersey City I would get daily reports … where it was clear that basic social distancing was not being practiced on large job sites,” SolomonÂ said.

“So this order seems to make sense for me and I think it’s the right decision.”

The order does have exceptions: particularly projects at state hospitals and schools, transportation and utility sites, affordable housing projects, “other individual housing sites that can adhere to strict limits on the number of workers on-site,” and “other limited instances,” Murphy tweeted.

However, many of the exceptions and “limited instances” were not immediately clear.

The order also forces essential retail stores, grocery stores in particular, to maintain a limited number of customers that amount to no more than 50 percent of their approved capacity.

Additionally, all customers and employees of these establishments will have to wear face coverings, with the governor noting that this isn’t due to food shortages, rather to ensure the safety workers.

“We put out similar guidance last week & are already seeing the positive results. Face covers + social distancing will save lives.”