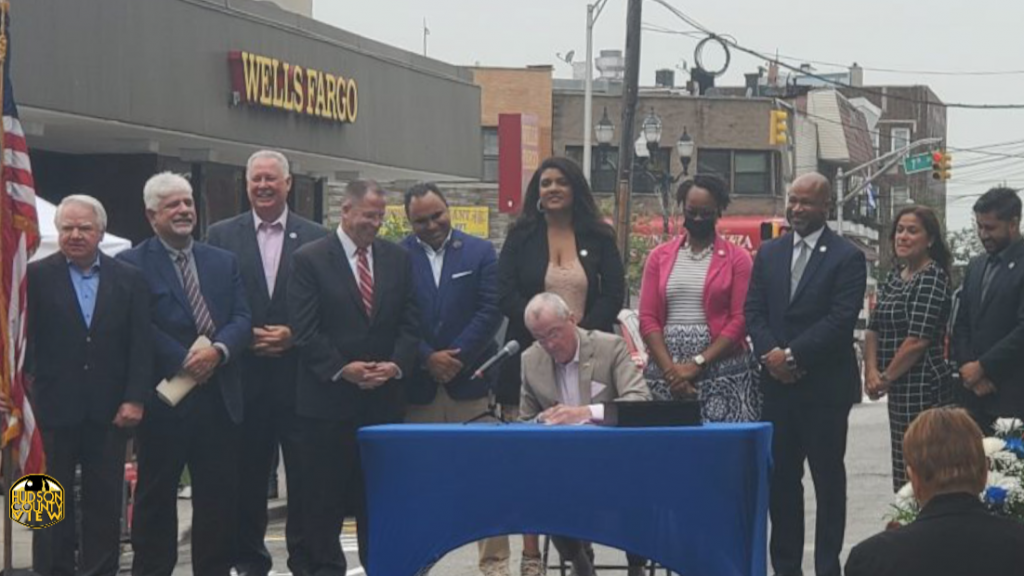 The legislation appropriates an additional $500 million for the COVID-19 Emergency Rental Assistance Program (CVERAP) and $250 million for utility assistance, both programs administered by the New Jersey Department of Community Affairs (DCA).

Murphy noted hundreds of thousands of tenants are fearing “for the literal roof over their heads.”

Additionally, a new eviction program within the DCA, led by Lt. Governor Sheila Oliver (D), who was not present, will help tenants pay back the rent they owe.

“This law will also responsibly wind down the eviction moratorium in a responsible way while protecting the rights of good tenants and honest landlords,” Murphy said at the podium on 7th Street between Summit and Central Avenues.

The governor explained that the program applies to those living 120 percent below the median income in their country and suffered due to the pandemic.

He also noted a family of four making less than $83,400 a year would qualify, which drew applause from the audience, adding problems with back rent cannot be used as grounds for eviction.

Furthermore, a debt collector cannot collect the debt which can’t be used against a tenant in court and landlords must accept all rental assistance their tenants are eligible for.

Murphy explained that through a new tool created by the DCA, renters facing eviction actions can certify their income status and once proven they live under 120 percent of the median income line and have a pending eviction dismissed.

“I commend President [Joe] Biden and his administration for their 60-day extension of the CDC moratorium in areas highly impacted by the virus,” Murphy said of the president’s recent action on rent relief following calls led by U.S. Rep. Cori Bush (D-MO).

“I’ve heard about tenant issues since I’m a kid, and that’s what got me involved in truly, I know the struggles that people face. That’s why I got involved,” stated Stack.

He continued that as the bill gets money to tenants, it will allow landlords to get their bills paid and properly maintain their properties.

From there, Assemblywoman Britnee Timberlake (D-34), a sponsor of Bill A-4463, noted how important a home is to people, especially during the pandemic when they double as an office and/or school.

“This is a tenant town, and COVID has been devastating to people. It really has,” he said.

“Thousands of folks across New Jersey and this very neighborhood are facing a once-in-a-lifetime economic crisis. The pandemic has sapped their economic resources,” said Frank Argote, President Emeritus and Housing Policy Chair of the Latino Action Network (LAN).

He said among Latinos and African Americans, those 65 and under died at a higher rate than those in other communities.

According to the Pew Research Center, Argote noted that 40 percent of Latinos were forced to take a pay cut during the pandemic, and 29 percent lost their jobs.

Speaker Craig Coughlin (D-NJ-19) and Senate President Steve Sweeney (D-NJ-3), Senator Troy Singleton (D-NJ-7), and Assemblywoman Annette Quijano (D-NJ-20) were lauded for their work on the eviction prevention bills but were not present.

However, the bill signing was largely overshadowed by Murphy lashing out at anti-vaccine protesters, which Sires also acknowledged.

The entire event streamed live on our Facebook page and can be viewed below:

Editor’s note: Daniel Ulloa is the vice president of communications for the Latino Action Network, participating in the New Jersey United for Marijuana Reform Coalition.