A politically active labor union that backed Ravi Bhalla for Hoboken mayor last year has released a TV ad attacking Councilman-at-Large James Doyle, an ally of the mayor, for voting no on the Hilton Hotel project.Â 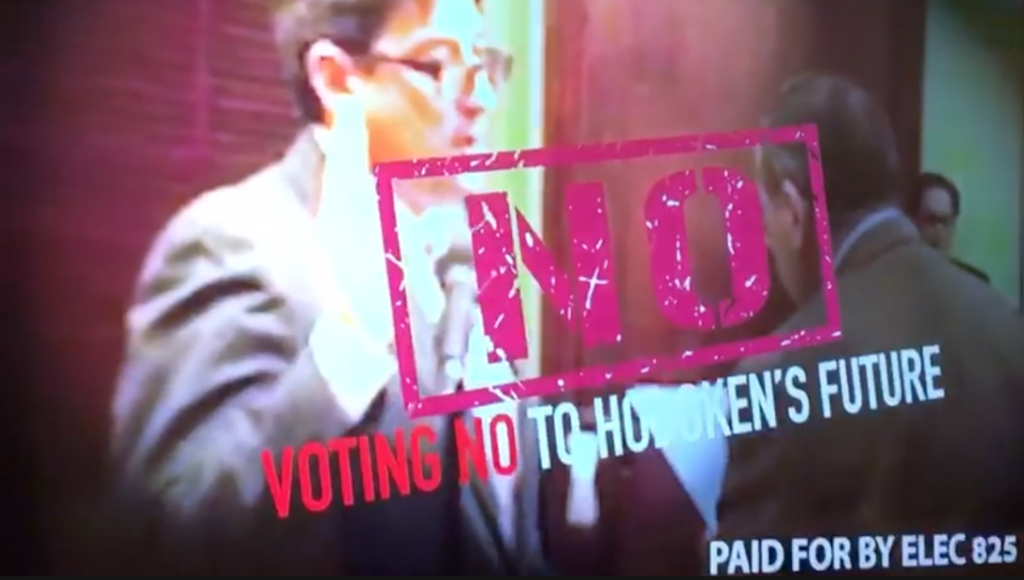 “Councilman Doyle abandoned Hoboken’s children. He voted against $5 million for community schools and community centers and turned down smart economic development, that would create hundreds of good paying jobs for Hoboken’s workers,” says a voiceover in an ad paid for byÂ International Union of Operating Engineers (IUOE) Local 825.

“Hoboken Hilton will be good for our city, but Doyle doesn’t get it. Councilman Doyle: voting no for our children, no to infrastructure and no to Hoboken’s future.”

After much contention between the mayor and council, the governing body approved the Hilton Hotel project, which comes with $4.85 million in community givebacks, by a vote of 8-1, with Doyle being the lone dissenting vote.

Those givebacks include $1 million to the Hoboken Public Education Foundation, $1.165 million in infrastructure improvements, $484,000 to be split between the city’s three charter schools, as well as 170 union labor jobs to construct the hotel.

Doyle voted no on the previous iteration of the project and was obviously not swayed by any of the changes.

He did not immediately return an email seeking comment this morning.

Local 825 backed Bhalla for mayor one year ago and their super PAC, Stronger Foundations, Inc., chipped in at least $50,000 to Bhalla’s campaign.

Speaking to HCV over the phone, Bhalla said the leadership at Local 825 agreed to stop running the ad and that it had already be taken out of syndication.

“I contacted the senior leadership at the operating engineers, who are friends and supporters, and I explained to them my longstanding friendship and personal relationship with the councilman and his family and how I felt the ad was inappropriate and unfair to Jim and they immediately took it down and apologized to me,” Bhalla said.

“I made an affirmative commitment, not at the request of any unions, to send a public message to the development community, that if they want to work with the City of Hoboken that there will be a baseline expectation that all development labor will be union based.”

The mayor also said he spoke to Doyle and they “had a good laugh” when discussing the commercial, indicating that he didn’t seem at all bothered by it.

Early this evening, ELEC 825 spokesman Mike Makarski said the union stands by the message in the ad.

“Our organization is committed to infrastructure investment and economic development – which are both cornerstones of this project. This left us no choice but to inform residents of his decision.”

Makarski also confirmed that after a “constructive conversation” with Bhalla, the union agreed to pull the ads.

Editor’s Note: This story has been updated with comments from Hoboken Mayor Ravi Bhalla and ELEC 825 spokesman Mike Makarski.