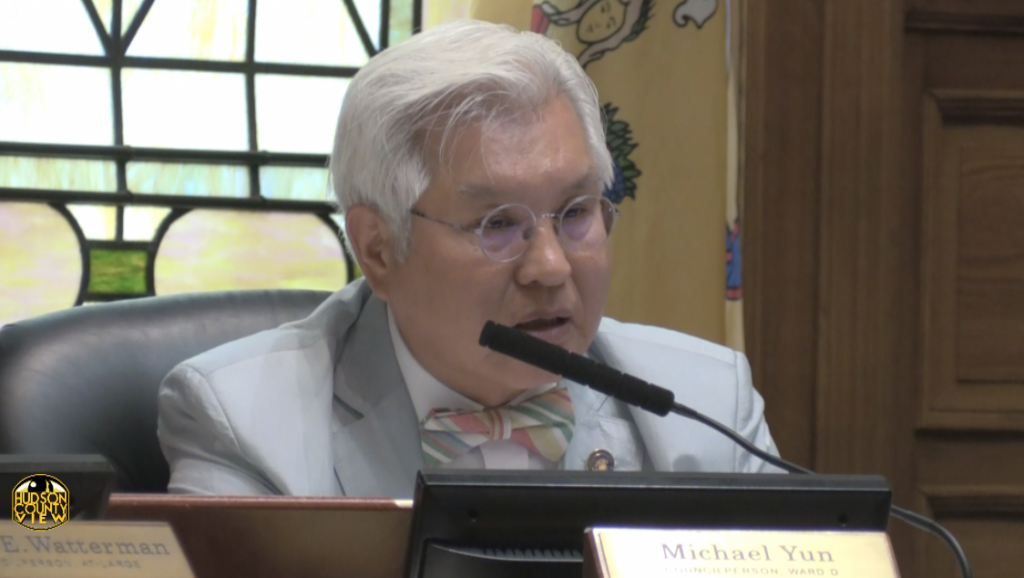 “We are beyond saddened by the passing of Councilman Michael Yun. He was a family man, a great businessman, and a tireless advocate for Jersey City throughout his nearly 3 decades of public service,” Fulop said in a statement.

“More than that though, he was a great husband, father, and grandfather as he never missed a chance to share how proud he was of his family. This is devastating for all of us here, as Michael was part of our Jersey City family. We will miss him and we will continue to aggressively fight against this pandemic, now in his honor.”

Yun, 65, had battled the virus for nearly two weeks at the Jersey City Medical Center, where he was a patient at the ICU at was “on oxygen” as of at least March 29th.

He was first elected to his post in 2013 and re-elected in 2017. He won both of those races running as an independent.

“I lost a good friend. I’ve known him for 46 years and I’m heartbroken. I don’t know what else to say, I feel sorry for his wife because she’s such a great person. I’m gonna miss him a lot.”

“Michael was definitely a family man and an asset to this city, a large put of this city is missing due to his passing. A great man and we’re definitely gonna miss him.”

Additionally, Jersey City Councilman-at-Large Rolando Lavarro tested positive for the virus last month, but more recently has been on the mend at home.

“I could’ve been in the same place where Michael is. I pray for his wife and his family. A huge loss for Jersey City, the council lost a great person. We may not have agreed on everything, but he was a great person,” he said.

“Councilman Michael Yun was a tremendous advocate for his neighborhood, for the local small business community and for all of Jersey City,” he said.

“I was honored to call Councilman Yun a friend and had the opportunity to represent a small section of his Ward in my Freeholder district, and I always found him to be a dedicated, hardworking public servant. My heart goes out to his family, his staff, friends and constituents during this tragic time.”

â€œLiterally, just moments ago, I learned about the passing of a good friend: Jersey City Councilman Michael Yun. I had literally exchanged notes with Michael probably not more than a week ago … He was a respected leader not just in Jersey City but in Hudson County,” he stated.

“A good man, a great professional, a terrific husband, a father, grandfather: we stand with Jersey City and Hudson County in mourning his loss. We send our deepest prayers and thoughts to his family: an outstanding public servant and a really, really good guy.”

After news of his passing, residents began placing candles and hanging signs outside of the headquarters of his civic association on Central Avenue, which used to be his general store, Garden State News, until 2015.

Pedestrians walked by, some in disbelief of the news, and drivers passed by, honking and yelling from their windows: “Terrible, he was a great guy,” one man said.

“He was a personal friend of mine, I’ve known him for 30 years,” said Erik-Anders Nilsson, a Heights resident who held back tears as he discussed the late councilman. “He was one of the first people when I first moved here.”

“He was wonderful to me, to the community … He would have parties here for seniors, kids; he’d always give out Christmas presents here.”

Yun was an active advocate in the Heights community, as well as the city at-large.

He was active with the Jersey City Peace Movement, which aimed to distribute cloths and supplies to the city’s homeless population was also active with another community organization called Action 21.

“He would get brand new hats, scarves, gloves, toiletries: tons of stuff,” Nilsson said. “And the boxes would cover the sidewalk. We’d bring it to Journal Square and Central Avenue and hand them out.”

His wife, Jennifer, remains in self-quarantine.

Yun is the second Hudson County elected official to pass away from the coronavirus.

As of yesterday, there were 1,411 coronavirus cases in Jersey City and 38 confirmed fatalities, according to Fulop.

Additionally, the New Jersey Department of Health revealed that there are 3,924 COVID-19 cases in Hudson County, along with 87 deaths, both the third most in the state by county.