Mister I ain’t a boy, no, I’m a fireman, and I believe in a promised land: Sam Springsteen, the son of New Jersey rock legend Bruce Springsteen, was one of 15 new Jersey City firefighters sworn in this morning.

The council chambers at City Hall was packed with people as the roughly 30-minute ceremony began. Jersey City’s new firefighters went through five months of training at an academy in Morristown.

“It wasn’t easy,” Sam Springsteen said of his training as he took pictures with his family.

“It was a long road, and he was very dedicated,” Bruce Springsteen said. ” … We’re just excited for him today.”

Today’s new class is the 10th under Mayor Steve Fulop’s administration, having hired a total of 204 firefighters.

“A big congratulations [to the graduates],” Fulop said. “It is a big responsibility and we’re thankful to have you on board. God bless, stay safe … we look forward to long careers for each and every one of you.”

“It feels good,” Keim said on being sworn in. “The department is recognized as one of the best in the state and it feels great to now be a part of it. It was a long process and I’m excited to get to work.”

“We talk about family and brotherhood, and that’s what this department is all about, ” he said, congratulating the graduates. “Welcome to our family.” 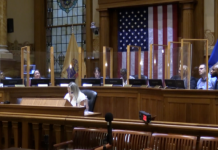