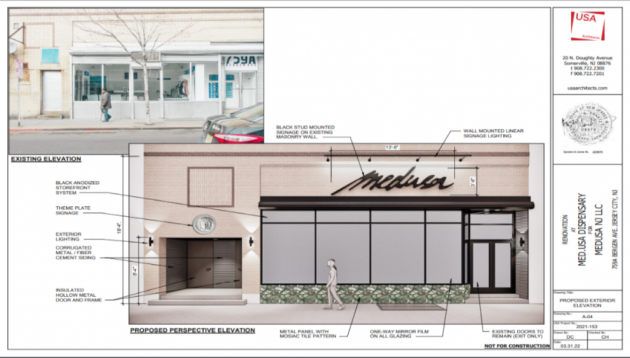 Medusa NJ’s attorney, Rosemarie Moyeno Matos, who operates her own office out of Hoboken, explained on behalf of owner Haytham Elgawly that it would be located at 759A Bergen Ave.

Architect Paul Swartz explained the plans of the building, including an entrance from a covered area to the retail counter with digital menus to purchase cannabis. The lounge would be downstairs in the basement, with bathrooms for patrons.

Ceres cross-examined Swartz in an attempt to prove the dispensary was too close to the high school, also asking him about the surveyor’s plans.

“I didn’t prepare it so I can’t really react to this,” Swartz said.

“It would appear the designation doesn’t match the architectural drawings that were provided,” said Planner John Taikina, who was hired by Ceres.

“We think that the property could be required to have parking. That might not have been the intent of the ordinance. But by the words… that parking is required. I think that is clear.”

Under cross examination, Surveyor James Heiser of DPK Consultants, said he disagreed since the doors were in the buffer.

“The box labeled, is that the doorway we’re seeing in the photo?,” Planning Board attorney Santo Alampi asked.

After some brief back and forth, Alampi indicated that the drawing show the doors 203 feet away from Hudson Catholic.

“Would you admit … the vast majority is closer to the school than 200 feet?,” Ceres asked.

“That is not relevant,” Alampi said.

“Mr. Ceres, anything else?,” Planning Board Chair Christopher Langston inquired, to which he said no.

Paolino asked if a property slated to be turned into a dormitory for St. Peter’s is within 200 feet of the doorway.

“Sir, you did not measure the distance to the building to the left? To the west?” Alampi asked.

“I did not,” Heiser replied.

Paolino attempted to inquire further, but Langston said the question was answered and urged him to move on.

“We’re not going to have principals and staff of Hudson Catholic testify,” Alampi said, arguing it would be redundant.

Alampi clarified that Matthews is an employee of the Archdiocese and therefore did not allow him to testify.

“There’s been a lot of what I call frivolous attacks against this plan. Haytham has been a stable of the community in Jersey City for the last 15, 20 years. I can speak to his ethical and moral background,” resident Pedro Mojica said.

He said Elgawly has raised hundreds of thousands of dollars for breast cancer research and has given away free turkeys for residents struggling during the holidays.

“He literally does everything he can to improve this community,” Mojica added.

Other residents also praised his commitment to the neighborhood.

“Haytham has been an advocate for the community as long as I can remember. He’s been the one giving a lending hand. He does everything for the youth: You’ll never hear anything bad about Haytham,” added Omar Hassan.

Others remained apprehensive due to the proximity to the school.

“I was undecided on this proposal. My concerns are the schools nearby. I don’t think it’s an appropriate location,” Valeriy Verkhovskiy explained.

“I want to put a rebuttal in. This does not have a parking variance. The language is not unclear. The intent is not as testified to by Mr. Ceres’ planner,” Supervising Planner Matt Ward said.

“There’s the expectation of a dormitory for a college. Does that fall under the 200 foot rule?,” Commissioner Steve Lipski asked.

Nonetheless, Ceres said 99 percent of the facility would be within 200 feet of the school, which preaches keeping drugs away from minors.

Paolino said a law court might determine whether a college counts as a school, hinting at possible litigation.

“I disagree with what I heard here,” he added, claiming the college counts as a school and thus the boundary issue would be valid.

“We got notice because it is within 200 ft. Clearly then, this property is 200 ft within a school. I see nothing of a community impact. St. Peter’s is not a small school. The impact on St. Peter’s could be strong. The application should be rejected,” Paolino exclaimed.

However, Matos said that argument would not hold water from a land use perspective.

“A school does not include a college. We’ve provided exhaustive evidence that … the door… is outside of that buffer. We’ve had pretty much everything but the kitchen sink thrown at us, and we’ve prevailed,” he argued.

“I looked at a lot of blueprints. Sometimes it’s not quite right. When a surveyor lays out something, that’s the line we’re going to go by. They’ve met every other aspect,” Commissioner Joey Torres said.

However, Torres was unhappy that the lounge would open as late as bars are in New Jersey, which is until 2 a.m. on weekends.

“We’re far from that stage yet. I vote aye,” he added.

Lipski recused himself as a deacon of the Archdiocese of Newark, which has jurisdiction over St. Peter’s and Hudson Catholic.

“This is just the first step for the application. I’m sorry he had to go through this. I hope that he can see it through,” Commissioner Joyce Watterman, also the council president, said before voting yes.

“I think the applicant met all the criteria. I understand the concerns,” Langston said.

Last week, the planning board approved seven dispensaries at the end of last month.