The Jersey City Planning Board approved an amendment to the Grand Jersey Redevelopment Plan street grid near Liberty State Park. 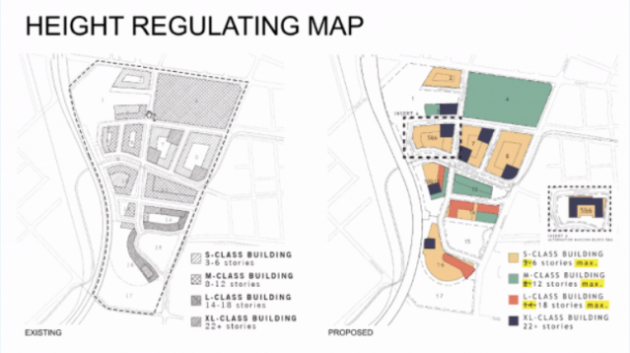 “We’re looking to make significant changes to the street grid,” she said, with Board Counsel Santo Alampi noted the plan was part of a longer report.

Attorney Eugene Paolino noted it’s a wide swath of land near Liberty State Park bisected by the Hudson-Bergen Light Rail. He explained it is partly owned by Argent Ventures, and the plan includes Mill Creek and comes off the Tide River Basin near downtown.

He called it a refinement of the plan as it progressed.

“There is no increase in density or unit count,” Planner Charles Heydt noted.

The Morris Canal Greenway, which includes a path for pedestrians, runs through the redevelopment plan area.

Opper explained that the greenway would be built out as the neighborhood is created, while Heydt pointed out that the plans include redeveloping post-industrial Brownfield sites that were polluted. The site is near the Liberty Science Center and Liberty Humane Society.

“The proposed changes will create a new neighborhood. This is consistent with the redevelopment plan,” Heydt added.

“We were asked by the property owner to fix the discrepancy,” Opper stated, continuing that is why changes to the street grid were being made.

Furthermore, only 350 units are permitted per building, even if the permitted number of stories is changed.

Opper noted the proposed changes did not trigger the Inclusionary Zoning Ordinance (IZO), which would mandate affordable housing be constructed.

However, it does fulfill the master plan’s redevelopment goals of making the area less car-centric, with fewer dangerous pedestrian crossing intersections and an overall more walkable neighborhood being built.

“The number of permitted units stays the same,” Heydt reiterated, explaining that two blocks would be consolidated.

Planning Board Chair Christopher Langston noted that bike lanes would be protected in the latest version of the plan.

The number of units on certain blocks would be changed in the amendments to the redevelopment plan.

“I think there’s a need for flexibility,” Paolino argued regarding the number of units per block.

He said these issues were discussed with the city’s planning division and they agreed with his assessment.

“There are other redevelopment plans that have such density requirements … and some flexibility,” Heydt said.

He explained they would document the tracking of housing units, citing the Colgate, Harsimus Cove, and Newport Redevelopment Plans as examples where flexibility was provided.

“I love that there’s flexibility. Santo, what do you think should we have some language?”, Langston asked.

“Do we have a provision on a need for the plan for the redevelopment agreement?”, Alampi questioned.

“I don’t recall a provision in the plan,” Paolino replied, noting that three redevelopment agreements cover the site.

“I don’t want to see a fire sale before the lot changes hands,” Langston said about the nature of the redevelopment.

The redevelopment plan received unanimous approval (9-0) from the board.

With restaurants taking a big hit due to COVID-19, Uber Eats...