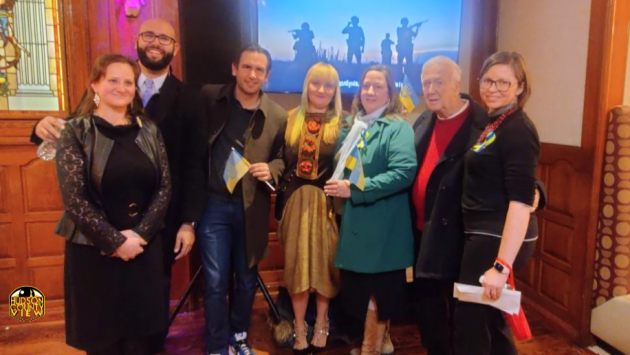 Specifically, they sought to raise money for ambulances to help wounded Ukrainian soldiers who are still staving off an invasion from Russia.

“The one thing that’s special about the Indian community is how charitable they are,” Jersey City Mayor Steven Fulop said, noting the generosity of others electeds present, which he said he would match.

He pointed out that Hudson County Commissioner Bill O’Dea (D-2) pledged about $2,500.

“He said 20 grand,” someone in the audience shouted out to laughter.

Fulop also praised the Ukrainian Jersey City for their efforts.

“Since day one, they have been an example to the entire state of organizing on the local level and having an impact, and that’s really what the Jersey City community is about,” he added.

“This is a great cause, a worthy cause. I’m glad to be here tonight. I’m giving you checks now for $1,840, and I’m gonna raise my commitment … I’m going to try to get to $3,000: We need to stay engaged in assisting our Ukrainian community,” O’Dea stated.

He also commended Board of Education Trustee Natalia Ioffe (who is Ukrainian) and Ukrainian Jersey City’s efforts to help refugees “escape from insane Russian unnecessary war, catastrophe over there.”

“Your leadership in this from the first day and the passion I’ve seen in you … is something we can all respect and admire,” O’Dea said to Ioffe.

He also thanked Indian community organizer Raiz Wahid for getting the event together. Wahid noted they were trying to raise at least $10,000 for the cause.

“Jersey City has this in its blood, always coming together no matter the demographic and fighting for people who can’t always fight alone,” stated Councilwoman-at-Large Amy DeGise.

She lamented that mainstream media outlets seem to be covering the war less recently.

“I actually had to teach my dad (Hudson County Executive Tom DeGise) how to get the news on YouTube. He always likes to stay up to date on this and talk about this. It’s so important to talk about this and have it on our mainstream media here,” DeGise added.

“Continue to keep it in our mainstream media. We want to be a little bit of humanitarians too. If there’s anything that you need… please let us know how we can help.”

Ward B Councilwoman Mira Prinz-Arey said that the two questions everyone should be asking now are “what do you need?” and “how can I help?”

Ward C Councilman Rich Boggiano said that the Ukrainian people should be proud of what they accomplished so far and that he is hopeful the war will be over soon.

“There’s nothing more American than us people supporting people who are looking for liberty and stopping oppression. We got a first-hand look at the people of Ukraine and their bravery. It really inspires us all,” asserted Ward D Councilman Yousef Saleh.

“There’s a saying, I’m Muslim, from the prophet, that ‘if you save one life, it’s like saving all of humanity.’ That is something admirable we are all striving to achieve tonight.”

Ioffe pointed out that she was thankful elected leaders were able to put their differences aside for the sake of a greater good, which is reflective of what Jersey City is about.

“Today is December 1st, and for the Ukrainians in the room, it means something special. It was the day in 1991 Ukraine voted to become independent. Sadly Ukraine is still fighting to preserve that independence,” she reflected.

“We celebrate the fact that Ukraine will be free and will be independent and sovereign, and we appreciate everyone’s effort in helping it be so. … It’s sad that it’s these tragedies that bring our humanity out. But as it long, it brings it out. It reminds us we’re a city and a community. He was there with us during our darkest moment, I should say, and I am grateful.”

She also thanked Hoboken Mayor Ravi Bhalla and their city council for being the first Hudson County municipality to pass a resolution in support of Ukraine in early March when the first refugees arrived.

Furthermore, Hudson County Clerk E. Junior Maldonado was acknowledged for securing a donation of body bags to cope with the casualties of the war, which he did in his capacity as part owner of a cannabis dispensary.

“Poland has been incredibly generous. From the Ukrainian people to the Polish people, we thank you,” Ioffee said to educator Kristen Zadroga-Hart.

She noted her grandmother was a refugee of the Russian invasion of Ukraine, who escaped by getting smuggled out in the back of a van similar to the ambulances they sought to help pay for.

Additionally, Ukrainian JC Treasurer Natalia Bezpalko explained the nature of the ambulances they sought to purchase.

“It’s the first line of defense for these wounded soldiers. These cars get them off the front lines to a stabilizing point,” she said, noting that they’re smaller than traditional city ambulances to be more mobile.

“We really appreciate your support: They’re life-saving,” she said.

Restaurant owner Vinay Kumar Ankum, who lived and studied in the Ukrainian capital of Kyiv for several years, sponsored the event and provided an Indian cuisine buffet as refreshments.