Embattled Jersey City Councilman Khemraj “Chico” Ramchal will be stepping down from his post after pleading guilty to charges related to a drunk driving arrest that occurred in the city last March. 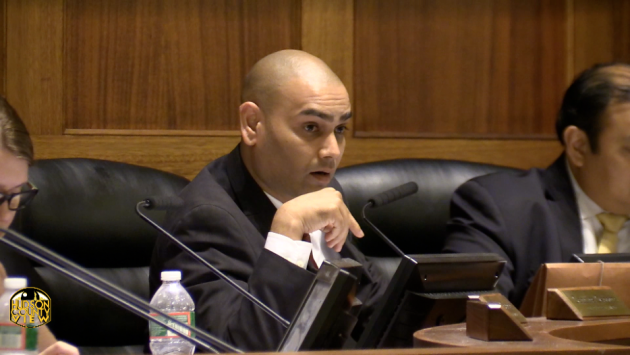 Ramchal has entered a guilty plea to charges of assault by auto (4th degree) and theft by deception (3rd degree) for allegedly having a no-show job at the Hudson County Incinerator Authority, officials confirmed today.

When reached by Hudson County View on his cell phone minutes ago, Ramchal said “I can’t talk right now, I’ll call you back” before hanging up.

His Rutherford attorney, John Bruno, said that “a weight has been lifted off his (Ramchal’s) shoulders” now that this ordeal is close to a conclusion, noting that “this has weighed on him very heavily since March 14th, 2015.”

While Bruno also stated that Ramchal is disappointed he has to resign from the council, he is “extremely grateful” he will not have to serve jail time. As it stands today, he plans on pleading guilty to driving while intoxicated on July 15th to conclude the case and receive his sanctions from the court – likely probation and a fine.

“He’s lost a lot: he’s lost his job, his car, his apartment due to one lapse on judgment … He looks forward to finding work in the private sector.”

Bruno added that Ramchal was gratified by the fact that no one in City Hall asked him to step down, opting to wait for the facts in the case to come out.

A former council aide for David Donnelly, who now runs the Jersey City Redevelopment Agency, Ramchal was elected as part of Jersey City Mayor Steven Fulop’s ticket in May 2013.

Fulop has faced some criticism in the aftermath of the accident for not calling for Ramchal’s resignation.

Meanwhile, District 2 Freeholder Bill O’Dea, who many consider to be Ramchal’s mentor, said he still considers him a friend despite this whole ordeal.

“He’s still a friend, he had some bad lapses in judgement, and he’s now accepting responsibility and paying the price for it. It comes with the territory,” O’Dea said over the phone.

O’Dea also confirmed that Ramchal had been away for about two weeks and planned to be away for another two, but decided to come back last night for the sake of resolving this situation as soon as possible.

The councilman’s blood alcohol content at the time of his arrest, where he hit another vehicle, was said to be 0.15 – just under twice the legal limit. Two days later, Ramchal issued a statement apologizing for the incident.

The accident also faced scrutiny since the vehicle Ramchal was driving had red and blue emergency lights, prompting the city to remove such lights from non-emergency vehicles for personnel.

The Jersey City Council now has 30 days to appoint a replacement to the board, before candidates seek to fill the seat in a November special election. The term will end in either June or December of 2017, depending on if city voters choose to move the general elections to November.

A source with ties to the Jersey City Democratic Organization said Ward B “has slim pickings” for a council candidate right now and speculation has already began to run rampant about Ramchal’s replacement.

Editor’s Note: This story has been updated to reflect new information from Ramchal’s attorney, John Bruno.