The Jersey City Council voted to approve their own raises, amendments to the Morris Canal project, and a Rook tactical vehicle at last night’s meeting. 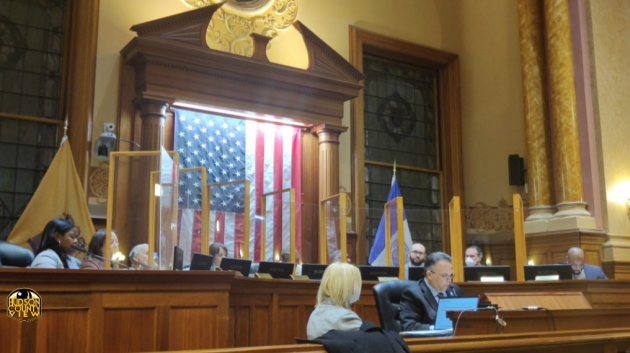 “I don’t think the council should be asking for a raise now,” said Jeanne Daly during the public comment period on the ordinance, citing the financial struggles people have endured during the COVID-19 pandemic.

Council President Joyce Watterman asked Corporation Counsel Peter Baker if the council members could opt out of the proposed raises, which would be a 29 percent pay bump: from $60,000 to $85,000.

Baker replied that the ordinance could be amended to reflect that the electeds had the ability to opt out of the raise and a motion to amend was approved unanimously (9-0).

Prior to the vote, most council members explained why they were voting yes or no.

“After the census, we were labeled a Class 1-A city: we need to start acting like that,” Ward B Councilwoman Mira Prinz-Arey said, also noting the lower classifications includes municipalities with 48,000 people, which is about the average size of their wards.

Ward F Councilman Frank “Educational” Gilmore, who used to work in the city’s recreation and health departments, said municipal workers should be taken care of before electeds.

“This is a hard one for me. I understand this is a very challenging job. It is very time-consuming. My daughter wishes I resigned yesterday,” he said.

“The only people who received raises were connected and knew someone,” he said about his time as a city employee. “The hard-working city people weren’t afforded that opportunity for a raise.”

Councilwoman-at-Large Amy DeGise, also the chair of the Hudson County Democratic Organization, said she felt they needed to be compensated fairly for the job and expressed difficulty balancing the role with her work as an educator, but said the timing was wrong.

“This group of people here is a very pro-active group that engages in the community. I just want to be clear on that,” stated Councilman-at-Large Daniel Rivera, further stating that  they text daily about developments in the city.

“We go out there and support our men and women. We’re engaged with the community as well. This group here does work hard. Make no mistake. They’re there for the constituents of Jersey City.”

Watterman noted that regardless of when such an ordinance was addressed, somebody would object to it.

“They are worth more than that because it is a 24-hour, seven-day-a-week job. I have seen them tirelessly work to make the people of Jersey City who elected them proud,” she added.

The ordinance passed 6-3 with Gilmore, DeGise, and Ward E Councilman James Solomon. voting no and indicating they would not take the pay increase.

The Morris Canal Manor amendments that were tabled last month was planned to be back on the agenda last night, to the dismay of Gilmore, who has railed against the 17-story project for months, dating back prior to his election in November.

“We’re in current conversations to develop this property. There’s no harm in keeping this ordinance tabled. Corporation Counsel told us we’re not facing a lawsuit tabling the ordinance,” he said.

“It was very clear the stance of the community. We just can’t support such a project in its current form. It’s very disheartening to see this brought back. Developers are in the business of making profits. So, if they’re allowed to go up to 17, you can almost bet everything they will go up to 17.”

He also noted that there is a Friday community meeting scheduled to discuss this development further.

“The developer in his own words … said he would submit another proposal … there will be some of the community benefits or not. It is a blatant disrespect to the registered voters of Ward, to the councilperson of Ward F, to be at this juncture,” Gilmore exclaimed.

“It is your advice that we would not be sued or … what’s your take on this?,” he asked Baker.

Watterman asked for Baker to wait until they voted to formally add the item to the agenda, which was approved 7-2, with Solomon and Gilmore voting no.

Baker said the sole purpose of the meeting was to review the decision made and ensure it was consistent with the city’s Master Plan and not “arbitrary and capricious.”

“I recommend … the council vote to un-table and vote for the ordinance,” Baker said.

He also said not doing so “would expose the city to potential legal liability as the project would be delayed unnecessarily.”

“I understand Councilman Gilmore’s concerns. He has my commitment to working with him and the community,” said Ward A Councilwoman Denise Ridley, whose project is in her ward after municipal redistricting.

“There will be another opportunity for the community to voice those concerns. I’m hoping the developer and the community can come to a middle ground,” Ridley said before voting for it, also stating she would ak the developer to reduce the size of the building.

Additionally, Prinz-Arey said it was a technical vote in nature, as did Saleh.

“I do understand Councilman’s Gilmore’s concerns. I am here to support you at the community meetings,” she said.

“This is a narrow question. A message to the developer, you must, must, must work with the community and the council people to their satisfaction,” Saleh said.

While Solomon agreed, he said the scope of the vote still held some significant weight.

“Even though it’s been defined as a narrow a question, we still have a duty before us. This land was designated to be a park. The JCRA almost used eminent domain, then reversed course,” he said.

“I don’t feel like I ever got a satisfactory reason. The logic never made sense. I don’t feel the evidence was ever presented to the council to address that.”

Gilmore again reiterated that the vote would set a precedent for development on Communipaw Avenue before voting no.

“I’m very concerned you pulled that ordinance off the table before we met. I thought we agreed we were going to be meet. No such meeting occurred,” said Morris Canal Manor Executive Director June Jones.

“It’s okay for Jersey City to become a world-class city. But there’s something wrong when its indigenous residents become the underclass,” added Veronica Sutton, who also said her family has been in Jersey City for some time.

Elvin Dominici, who unsuccessfully ran for council-at-large on a slate with Jones in November, called the decision politics as usual.

Former Ward F Councilman Jermaine Robinson, who was unseated by Gilmore, spoke in favor of the project as he did while he was in office.

“There’s been dozens of meetings over the last three years. Every time I see a 13-year-old get murdered on the street … I see something is going wrong .I fought for this project. It might be a little too big, but it’s the right thing to do for Jersey City because we get Jersey City’s first rec center.”

He continued that it would contain coding classes and classrooms for other subjects, as well as that minority employment and business would be fostered there.

Regarding the acquisition of the Rook tactical vehicle, which raised some eyebrows on Monday, Democratic Committeeman Gary Spingarn acknowledged that while a federal grant will cover the initial expense, there are still costs to maintain and store it.

“It pains me to see Jersey City follow the tails of the military-industrial complex … while ignoring the needs of the people,” he said.

“I noticed it only goes to the second story. What good does that do? We have the high rises here,” Daly added.

Saleh, who was among the council members who asked Public Safety Director James Shea questions about the vehicle on Monday, said he was convinced this was a good decision.

“It’s a defensive capability. And I believe that grant was specifically for the Rook. It is to protect negotiators, to protect police officers. I wish we did not have to purchase this. But after December 10th, 2019, we have to protect first responders,” Saleh said.

Gilmore, who also had some concerns at the caucus, concurred with Saleh.

“I can actually visualize and see how this could be beneficial when the individual was barricaded in the car. I do understand the concerns of the community. There’s no weapons on it. It’s a defense mechanism,” Gilmore said.

The resolution was ultimately approved unanimously (9-0) as part of the consent agenda.

Poll: With battle lines drawn, who will win North vs. South...